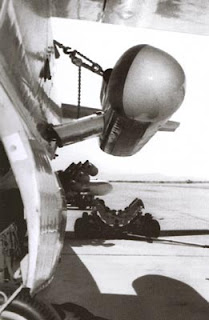 In the late 1950s Soviet defenses against the bombers of the Strategic Air Command were improving by leaps and bounds as more capable fighters, radars and surface-to-air missiles were deployed not just on the periphery of the Soviet Union but also around key cities and industrial centers like Moscow and Leningrad. At the time, SAC's bomber force consisted of 100 Boeing B-52 Stratofortresses, over 1,000 Boeing B-47 Stratojets, and 200 Convair B-36s that were gradually being phased out. As the tip of SAC's spear, the B-52s had a comprehensive electronic countermeasures suite as well as an onboard electronic warfare officer who could constantly reconfigure the jammers to meet the threats.

The B-36s being piston-driven (despite the addition of four jet engines) was soon to be phased out, so there was no need to upgrade to the ECM systems. But the B-47 made up three-quarters of SAC's offensive striking force and unlike the B-52, didn't have the space or power for additional jamming systems to put it on par with the Stratofortresses.

The solution came with a $2.5 million contract code named Tee Town. Carried out in 1958 to 1959 with the assistance of Douglas Aircraft's Tulsa Division, Tee Town consisted of two 14-foot long pods mounted on cantilevered pylons attached to the bomb bay doors. Each pod carried four ALT-6B jammers on the lower half of the pod and covered by a fiberglass dielectric fairing. Ram air was ducted around each of the jammers for cooling and Douglas added upgraded electrical generators on the Tee Town aircraft to handle the increased electrical demand.

Tee Town was planned as an interim measure pending deployment of the specialized Phase V jamming escort version of the B-47 that would accompany strike cells of nuclear-armed Stratojets. Sixty B-47s were modified to carry the Tee Town pods and were assigned to the 303rd Bomb Wing at Davis-Monthan AFB in Arizona and the 509th Bomb Wing at Pease AFB in New Hampshire.

Although only 120 of the Tee Town pods were built, it marked a historical point as the world's first electronic warfare jamming pod designed for high speed aircraft to go into production.