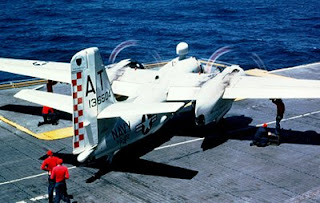 The need to fit aboard the smaller elevators on the Essex-class fleet carriers and the lack of a folding nose or tail meant that the Grumman S2F (later redesignated S-2) Tracker had a stubby fuselage and a short moment arm which required a relatively large vertical fin to maintain control and directional stability. However, the Tracker was so short-coupled that in a single engine situation, the fin and rudder despite their size were still insufficient and an adverse yaw into a spin would result. At lower airspeeds even with both engines operating the Tracker was a handful during takeoff and approach.

To compensate for this adverse effect, Grumman designed what was called the SERA- Single Engine Rudder Assist. If you look closely at the fin and rudder of the Tracker, the rudder appears to be two vertical sections and a prominent trim tab. During normal flight, only the rearmost section of the rudder and its trim tab acted as a conventional rudder and the section of rudder closest to the fin acted as a rudder trimmer driven by an electric screwjack.

During an engine out, takeoff, or approach, the SERA system was activated and the section that in cruise flight acted as a rudder trimmer switched over to hydraulic activation and acted with the rearmost section of the rudder to act together, effectively doubling the area of the rudder during those critical areas of flight. With the SERA activated, the full two-section rudder traveled an impressive 40 degrees on each side, allowing the S2F Tracker to have a minimum control speed of 85 knots with one engine out.

Another unique feature of the Tracker's tail section was a spring link that connected the retractable tail wheel bumper and the elevator trim. When the Tracker's undercarriage was lowered, there was a pronounced shift in the center of gravity forward as the heavy main undercarriage units swung forward out of the nacelle landing gear bays. To counteract this, when the tail wheel bumper lowered as part of the undercarriage cycle, the spring link automatically provided the needed amount of nose-up trim, lessening the workload of the flight crew on approach to the carrier.