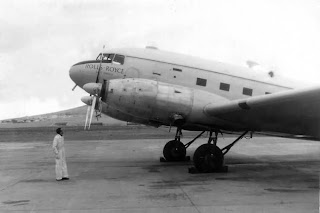 While the Vickers Viscount and its Rolls-Royce Dart turboprop engines underwent an exhaustive test flying program befitting its groundbreaking status as the first turbine-powered production airliner to fly, the Dart engines themselves would also fly on a variety of testbed aircraft to allow not only Rolls-Royce's engineers to gain operating experience with the new engine, British European Airways (BEA) also gained operating experience as well with the Dart Dakota, a conversion of one of the airline's DC-3s with Dart turboprops. Two BEA DC-3s were converted to Dart engines- G-ALXN "Sir Henry Royce" and the other DC-3, G-AMDB "Claude Johnson", BEA's managers, pilots, and maintenance crews gained valuable experience in turbine operations before the arrival of the Vickers Viscount.

One of the unique aspects that made testing the Dart engine challenging was that it was a purely postwar civilian engine program that lacked a large body of military operating experience that in the past made applying civilian versions of military powerplants relatively smooth. Both BEA and Rolls-Royce lacked data on the ideal flight patterns, control methods, and maintenance pitfalls for the Dart engine and the use of the two Dart Dakotas would remedy this situation- rather than flying a test program, BEA's Dart Dakotas would be integrated into BEA's routine operations to see how the engines fared in routine use.

Early model Dart engines (designated Mk. 505s) replaced the Dakota's radial engines and the nacelle installation would approximate that of the Viscount as closely as possible. As the DC-3 was an unpressurized aircraft, it was impractical to operate the Dart Dakota at lower altitudes (which would have been inefficient for the engines) or at higher altitudes (as the passengers would have needed a bulky oxygen supplementation system). As a result, BEA would employ the two Dart Dakotas for freight only services as only the flight deck crew would need oxygen to operate at the at the efficient higher altitudes.

The first scheduled "operational" service was flown on 15 August 1951 when G-ALXN carried 1.5 tons of cargo from BEA's original base at Northolt to Hannover, Germany. Following succesful introductions to service, BEA then deployed the two Dart Dakotas on all-cargo scheduled services out of Northolt to Copenhagen and Milan in addition to Hannover until the end of the trial period in 1952.

Compared to a stock DC-3, the Dart Dakotas had the following performance figures: 202 mph/325 km/h for the Dart Dakota vs. 167 mph/270 km/h with a gross weight of 28000 lbs at an altitude of 25000 feet vs. only 7000 feet for a standard DC-3. Ultimately the trial period was uneconomic, as the Dart Dakotas weren't able to fly as many hours as planned thanks to a shortage of qualified flight crews and trained engineers and maintenance crews. Technical difficulties as well resulted in numerous canceled flights and delays- but these were the very sort of problems BEA, Rolls-Royce, and Vickers wanted to see before the Viscount entered scheduled passenger services.

At the end of the trial period, G-ALXN flew for a total 538 hours in Dart configuration and her sistership G-AMDB flew for 668 total hours. Both aircraft were then reconverted back to standard DC-3 configuration, flying services with BEA until early 1962 when they were passed on to the British independent operators of the day.