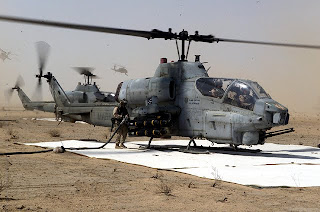 On 18 January 2003 the over 7,000 Marines of Task Force Tarawa set sail from the United States aboard seven amphibious assault ships with 72 aircraft (and more following them) for the Persian Gulf in the run up to Operation Iraqi Freedom. The Bell AH-1W Super Cobras of Marine Light Attack Helicopter Squadron 269 (HMLA-269 "Gunrunners") from MCAS New River, North Carolina were reinforced with additional gunships from sister unit HMLA-167 for a total of 18 AH-1W Super Cobras and nine Bell UH-1N transports. The reinforced squadron embarked on the USS Saipan (LHA-2) and the USS Ponce (LPD-15) for the sea transit to the Middle East. As Task Force Tarawa transited through the choke points of Gibraltar and the Suez Canal, HMLA-269 would have six Super Cobras on flying alert to protect the task force.

Arriving off the coast of Kuwait on 18 March 2003, ten of HMLA-269's Super Cobras were detached to a forward base 23 miles south of the Iraqi border to participate in the squadron's first operational mission, the assault on the Iraqi forward reconnaissance positions at Safwan. The first combat missions by the AH-1Ws of the squadron on 20/21 March were notable, however, for the combat use of what was then-a-classified version of the AGM-114 Hellfire missile, the AGM-114N thermobaric Hellfire.

Thermobaric weapons were first developed in the 1960s by the engineers at the China Lake Naval Weapons Center and were what were then known as fuel-air-explosive weapons. FAEs work by releasing a cloud of volatile vapor which is then detonated, creating a large and destructive pressure wave in the process. A standard blast/fragmentation warhead creates a large pressure spike that decays rapidly. A thermobaric warhead, on the other hand, creates a large sustained pressure wave that propagates through any building or enclosed space, making it ideal for urban warfare. In the late 1990s, the engineers at China Lake had succeeded in creating non-liquid thermobaric explosives using metal particles (such as aluminum or magnesium) instead a liquid. The initial detonation releases the fine particles which then ignite, creating the large and sustained pressure wave. For this the China Lake Naval Weapons Center was awarded a classified US patent.

Marine Corps combat experience prior to OIF had shown that missiles like the TOW or Hellfire with their blast/fragmentation warheads were often unsuitable in urban environments as the pressure spike from the warhead detonation would be attenuated inside enclosed spaces. In addition, the missiles would often pass right through the target building before detonating.

The thermobaric weapons work at China Lake resulted in what was called a metal-augmented charge (MAC) that was the ideal warhead for a new version of the Hellfire missile desired by the Marine Corps. The AGM-114N's thermobaric warhead consists of a layer of fine aluminum powder sandwiched between the warhead casing and the explosive fill in the center. On detonation, the aluminum powder is dispersed and ignites, creating a large and sustained pressure wave. Live fire tests at White Sands and China Lake proved the weapon to be effective.

When HMLA-269 arrived in the Persian Gulf, the squadron's commanding officer, Lt. Col. Jeffrey Hewitt, was one of the few Marine aviators aware of the AGM-114N as his previous posting before taking command of the "Gunrunners" was a senior posting in Marine Corps weapons development working closely on the tests of the thermobaric Hellfire missile. The thermobaric Hellfires used in the development and testing work in the United States prior to OIF were converted from stock AGM-114K Hellfires and Lt. Col. Hewitt knew that there were 60 AGM-114Ns left over from the test program that were in storage. Aware that the Marines of Task Force Tarawa faced many urban threats before even reaching Baghdad, he arranged for those 60 missiles to be shipped out to the squadron. However, the US Navy wouldn't transport them as the missiles were never certified for carriage by ship. Lt. Col. Hewitt then turned to the US Air Force, who were more than happy to fly out the missiles immediately to Kuwait for the squadron.

HMLA-269's original plan was to keep the precious AGM-114Ns until Task Force Tarawa reached Baghdad, but they also wanted to prove that the thermobaric Hellfires worked in actual combat. Several were fired during the assault on Safwan and were highly effective. Interestingly enough, during their use in the assault on Safwan and in HMLA-269's combat missions on the march to Baghdad, the AGM-114N thermobaric Hellfire missiles (called TB Hellfire) were still classified!