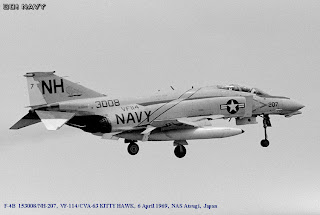 When the McDonnell F-4 Phantom II was conceived, it was for the role of fleet air defense but McDonnell wisely made it strong enough to carry a sizeable bombload, a hold over from a previous design incarnation of the Phantom that was optimized for strike missions. Once the first F-4Bs headed out to the fleet, the avionics of the new fighter were geared around air defense but it did have a bombing computer- one for nuclear "toss-bombing" and one that many Phantom crews in Southeast Asia found wholly inadequate for the strike mission they were called upon to perform in the mid-1960s as the Vietnam War escalated. Many squadrons lacked any air-to-ground training and some were lucky just to get triple-ejector racks (TERs) or multiple-ejector racks (MERs) to improve their bomb-carrying capacity.

There were, however, some resourceful crews in the Navy Phantom squadrons headed to Southeast Asia. In those days, most of the Phantom pilots came from the F3H Demon and F4D Skyray communities with new RIOs (radar intercept officers) being trained by Marine Skyknight crews. Those pilots were trained in fleet air defense and didn't have any air-to-ground backgrounds but some pilots came from the attack community (A-1 Skyraider and A-4 Skyhawk) and some were proficient in gunnery having come from F-8 squadrons. Throw in a few motivated officers from the air defense group and you had the making of a solution that improved the Phantom's bombing performance in Vietnam.

The first squadron to come up with a fix to the lack of a proper bombing computer on the Phantom was VF-96 on their mid-1960s cruise aboard the USS Ranger. With the carrier stopping at Subic Bay on its way to the Gulf of Tonkin for line operations over Vietnam, the crews came up with a way remove the fixed reflector sight on the cockpit coaming of the Phantom and replace it with the lead-computing sight from the Douglas A-1 Skyraider. The Skyraider's sight allowed lead angles to be entered and based on calculations made the strike-minded pilots in the squadron, they were able to create a reasonably effective bomb sight for dive attacks. Special mounts were cast in the foundry at Subic Bay that allowed the Skyraider sights to be mounted on the Phantoms and some of the pilots tested them out before the Ranger deployed, becoming the first USN Phantom unit so equipped! Their sights even allowed for more effective use of rockets in ground attacks as well, a weapon used in flak suppression missions.

The pilots of VF-114 who were embarked on the Kitty Hawk had more lead time to prepare than VF-96. Before leaving the United States, the strike-minded pilots in the squadron calculated the sight settings to use on the existing Phantom sight to allow for dive bombing attacks at any angle between 10 to 45 degrees from various altitudes, the thought being that having more time, they might be able to make the stock Phantom sight workable. They found that carrier deck landings jarred the sight settings, repeatedly knocking the fine tunings out of whack. A resourceful ordnance officer went to Litchfield Park in Arizona where a number of retired Skyraiders were being stored and he collected enough Skyraider sights (that as I had mentioned could compute lead angles and were also quite robust) for the Phantoms of the squadron. Low profile mounts were devised that improved the visibility particularly during carrier landings and along with extra MERs and TERs that they had managed to get from a Marine attack squadron, VF-114 became the second squadron to improve its air-to-ground capability.

Both squadrons managed to this on their own without any external assistance from the Navy or McDonnell and for the most part, kept their tactics in use all the way through the 1960s!