The Legend of Half Moon Bay 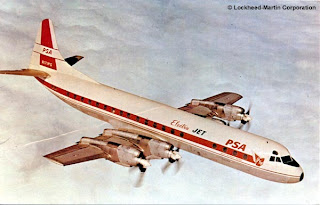 It's a travel nightmare. Weather delays and closures at airports during peak travel seasons. It was no different in the past than it is now with air travel when we're at the mercy of the weather despite the advances in technology since the end of the Second World War ushered in unprecedented growth in air travel. Picture in your mind it's the start of the 1962 Christmas holiday travel season and one of the primary airports on the US West Coast, San Francisco, is socked in with fog so thick that anything more than ball toss away fades into the murk. Fog at San Francisco International is nothing new, but this particular week in 1962 the fog stubbornly persisted throughout the holiday season. Flights were delayed or canceled and passengers were stranded at San Francisco International Airport. Unless, of course, you're booked on Pacific Southwest Airlines, PSA.

As the tarmac at Half Moon Bay wasn't strong enough for the Electra, PSA's pilots turned just barely off the runway with only two engines on one side running while passengers disembarked to waiting buses to take them to San Francisco. Meanwhile new busloads of passengers from San Francisco queued up away from the disembarking passengers to begin boarding. Since Half Moon Bay didn't have a control tower, another PSA pilot with a radio was stationed on the roof of what became a makeshift terminal building using the company radio frequency to keep arriving and departing Electras apart.

San Mateo Country sheriff's deputies were called in to keep the curious clear of the flight operations and to direct the traffic as many ticketed PSA passengers began to show up at Half Moon Bay Airport itself. PSA ran radio commercials throughout the Bay Area that said "PSA will get you home for Christmas" as the Electra flights shuttled back and forth to the clear skies of Southern California. Some PSA employees would work 36 hour shifts and a small hotel was used for flight crews that timed out on their duty hours.

The unique Half Moon Bay Airport operation ran from 14 December 1962 all the way through Christmas, carrying over 40,000 passengers on 488 flights to Burbank, Los Angeles and San Diego. It was then that the aviation "Legend of Half Moon Bay" was born as PSA was inundated for weeks after the holidays with letters of thanks from passengers.

It's one of my favorite airline history stories and I count myself lucky to have been able to fly PSA before they were absorbed with great sorrow into USAir.