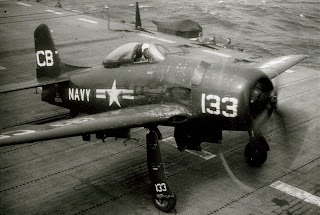 Contrary to common belief and the traditions of the Grumman "Iron Works" embodied in the F4F Wildcat and F6F Hellcat, the F8F Bearcat was designed from the outset to be as light as possible to give it the highest performance possible. The big Pratt & Whitney R-2800 radial engine of the Bearcat weighed about 3,000 lbs and the airframe itself weighed in at only 4,000 lbs empty- quite literally making the Bearcat "half-engine"! To make the aircraft as light as possible, many features common to other Grumman fighters were left out or reduced on the Bearcat- not to mention limits on the fuel load and armament. After the Bearcat landed on the carrier deck, the deck crew would have to manually stow the tailhook and used a pry bar that fit into a socket in the wings to manually fold the wings. Even the prop spinner was left off to save weight.

But by far the most unusual feature originally intended for the Bearcat in pursuit of lightness was what Grumman called the "Safety Wing Tips". The designers of the Bearcat figured out that if the outer wingtips of the Bearcat could be designed to tear off if 9Gs was exceeded in combat, then the wing inboard of that point could be lighter yet still support the specified 13G ultimate load- instead of having a whole wing to support 13Gs, they'd only have enough structure on the outer 3 feet of wing for 9Gs.

Well, there's a problem with that idea- the Bearcat's small wing meant that losing 3 feet of wing on one side would lead to control issues with asymmetric lift. Primer cord was fitted inside each wing to blow off each wingtip simultaneously- the first wingtip to shear off if 9Gs were exceeded tripped a microswitch that detonated the primer cord on the other wing to shear off its wingtip. It actually got flight tested and chase pilots were less than thrilled about the idea of all the flying shrapnel, so the system was redesigned to use explosive bolts.

Unfortunately in an accident during flight testing a ground crewman was killed when one wing's explosive bolts fired off, so the controversial system was scrapped and Grumman had the wing re-stressed for a lighter G load.

Source: Aviation History, May 2010. "Engine with a Saddle: What the bantamweight Bearcat lacked in finesse in made up for with brute strength" by Stephen Wilkinson, p25-31.
at 16:26