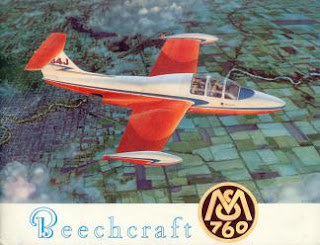 In the 1950s the Armée de l'Air (French Air Force) held a competition for a new jet trainer. The manufacturing firm Morane-Saulnier offered a T-tailed twin jet design that had the student and instructor sitting side-by-side and Fouga offered what became the winning design, a tandem-seat twin jet with a butterfly V-tail which went into production as the Magister. To make the best of the loss, Morane-Saulnier redesigned their aircraft into a four-seat light jet designated the MS.760 Paris which was used by French military as a liason and VIP transport. The Paris was also used by the militaries of Argentina and Brazil.

In 1958 Beechcraft began to market the MS.760 in the United States after the aircraft received its FAA certification. Touring the country and demonstrating it to businessmen as a faster alternative to the piston twins then coming into use in the general aviation, the MS.760 was noted for its ease of maintenance and simplicity of construction. At airshows where the MS.760 was demonstrated, the aircraft would quite literally be disassembled before the crowd, reassembled and flown off again.

For several years Beechcraft tried to gauge customer acceptance of what could be considered the first VLJ design (very light jet). Showing its military origins, a small boarding ladder was stored in the glove box of the cabin that was needed to get into and out of the aircraft. Upon seeing this feature, Walter Beech's widow Olive Ann (who took over the company after her husband's death) is reported to have said that no self-respecting woman would climb into an airplane that way.

Though it's debatable if Olive Ann Beech had anything to do with the eventual demise of the Beechcraft project to market the MS.760, it's quite certain that the arrival of the faster Learjet 23 which made its first flight in 1963 swung the business jet market in Lear's favor. However, in 2009 a long time Paris owner and fan, Edward Furtak, and his company JetSet, acquired the type certificate for the Paris from SOCATA, the successor company to Morane-Saulnier when it changed its name in 1966. Thirty remaining MS.760s were purchased from SOCATA along with the engineering, blueprints, tooling, and even rebuilt Turbomeca turbojet engines. An additional 10 aircraft were purchased from Argentina with the intent of overhauling the airframes and offering them for sale as a VLJ. The intent of the company is to also re-engine the MS.760 with either Pratt & Whitney JT15D or Williams FJ44 engines.