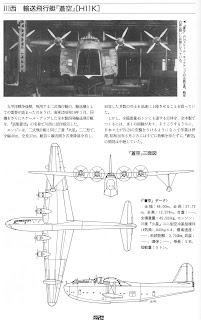 By 1944, the US Navy's unrestricted submarine warfare against Japanese shipping had reached its highest totals in terms of shipping sunk and it was taking its toll on Japanese industry. As an island nation with few natural resources, Japan was dependent upon shipping for the importation of raw materials and oil for not just its industry but also for it military forces. The Imperial Japanese Army Air Force looked at using transport gliders to bring oil from Sumatra to Japan, but the fuel costs to do so outweighed the volume of oil brought in. The Imperial Japanese Navy, however, with its experience in operating large seaplanes, asked Kawanshi to develop a large transport seaplane to make up for the shipping losses.

Since metal alloys were desperately needed in the production of fighters for homeland defense, Kawanshi's H11K would have been made of wood wherever possible- making it in a sense a Japanese counterpart to the Hughes HK-1 "Spruce Goose". Starting out by scaling up the H8K but having a nearly identical fuselage keel, the H11K was powered by four 1,850-hp radial engines with most of the wings and fuselage made of wood. The two deck fuselage had a clamshell-opening nose to allow straight-in loading of cargo.

Kawanshi built a full-scale mockup of the H11K for inspection and review by the IJN at one of its facilities on the west coast of Japan. However, the deteriorating war situation meant that after design began in 1944, the full-scale mockup was nearly completed on 1 April 1945 when it was destroyed along with most of the Kawanshi facilities in a bombing attack. No further work was attempted on the H11K Soku after the attack.