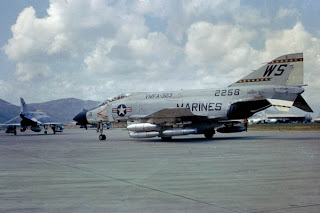 Unlike the Navy's F-4 Phantoms which operated from carriers in the Gulf of Tonkin, the Phantoms of the US Marine Corps operated from two land bases in support of Marine troops- Da Nang and Chu Lai. Da Nang housed both USAF and USMC units and in the summer of 1966, Chu Lai was built to relieve the congestion at Da Nang- the first Marine Phantom and Skyhawk units at Chu Lai, though, had to use SATS- short airfield for tactical support- which was pretty much the elements of a carrier deck from the catapults and arresting gear used on a land based. The SATS equipment was used until the main runway at Chu Lai was completed in the following year.

Marine Phantoms sat "hot pad alert" at both Chu Lai and Da Nang. The Phantoms were usually loaded with a combination of Mk.82 Snakeye bombs and napalm. At each end of the runways were revetments for the alert Phantoms that allowed them to start up and head out immediately on the runway.

Marine crews rotated eight hour shifts on hot pad alert. There were at least two crews sitting in a ready room adjacent to the hot pad fully suited up and waiting for the urgent call for air support by a Marine unit in the field. The F-4s were full preflighted at the start of each eight hour period and the same ground crews worked the same eight hour shifts to keep the planes "cocked and ready". Once the alert bell went off, the crews made the short run to their aircraft where the plane captains got them strapped in while the RIO got the information on the target, the forward air controller to contact and the necessary frequencies while the pilot got the big fighter started up. Once cleared by the tower and the chocks were pulled, the two alert Phantoms rolled out and onto the runway for an afterburner takeoff. With practice, the flight and ground crews could get the alert Phantoms airborne within five minutes of the alert bell going off.

Should the alert crews be launched, there were two back up flight crews, one on 15-minute alert and one on one-hour alert. As soon as the alert Phantoms were launched, a new pair of aircraft were rolled onto the hot pad already armed and fueled and preflighted by the ground crews. The flight crew on 15-minute alert then became the new alert crew and the one-hour alert crew moved up to the 15-minute spot. If things in the field were hectic (like it was during the siege of the Marine Corps firebase at Khe Sanh, there would a crew on 30-minute alert as well.

Over the course of a week, both the A-4 Skyhawk and F-4 Phantom USMC squadrons in residence at Chu Lai and Da Nang rotated hot pad alert and at Da Nang, the F-4s of the USAF's 366th Tactical Fighter Wing also shared the hot pad alert.

The Marines also had a hot pad for air-to-air alerts for MiG activity, but this was rarely used as the Navy BARCAP (barrier combat air patrol) shouldered most of the patrols for the occasional MiG activity. It got to the point that the Marines just parked a hangar queen Phantom on the air-to-air pad for appearances!