The Rise and Fall of Air Florida under Ed Acker 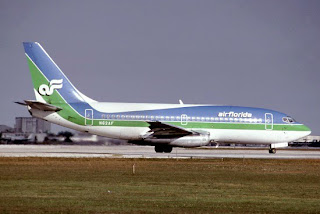 Aviation history is often a study in technology as well as events but sometimes the really fascinating parts concern the personalities and how personal traits shaped major decisions that impacted the course of history. One of the those personalities was C. Edward Acker, one of the airline industry's CEOs during the chaotic deregulation period in the United States in the 1980s. If there was one quote that summed up the titanic personality of this Texan, it was something he himself once said: "Once you get hooked on the airline business, it's worse than dope."

But to really understand what Ed Acker did to airlines, you have to go back before deregulation to the state of Florida. After twenty-some years of running various businesses ranging from a candy company to a roofing business, Miami businessman Eli Timoner decided in 1972 to start an airline called Air Florida with some second-hand Lockheed Electras. But Timoner himself admitted that his only airline experience was that of "being a frequent flier". But he had seen the rise of Pacific Southwest Airlines as an intrastate carrier in California and probably was aware of the beginnings of Southwest Airlines in Texas. By being in intrastate carrier, he wouldn't have to deal with the Civil Aeronautics Board which in the days before deregulation controlled all aspects of the industry from routes to fares and even to some degree, aircraft acquisition. Timoner felt that the time was right for Florida to have its own intrastate carrier.

But as a Miami newspaper reporter once put it, Timoner was "long on ambition and short on experience". In its first seven years of operation Air Florida scratched out a small niche for itself in the Florida market, but it was hard going and in 1977 the small airline lost $2 million and Timoner pondered whether it was worth continuing.

Back in 1975, a federal investigation was underway at Braniff International that accused officials of the Dallas-based airline of illegally distributing over $1 million in airline tickets to travel agents throughout Latin America, Braniff's traditional international stronghold. Some of the proceeds made their way into Richard Nixon's 1972 presidential campaign and with Watergate still bringing federal scrutiny in every back room and corner of the corridors of power, Ed Acker, the Braniff president and Harding Lawrence, the Braniff chairman, were the two highest ranking Braniff officials named in the settlement with the CAB that resulted in a $300,000 fine against the airline. Acker stepped down but he wasn't going to stay out of the business for long. That was when he found out Eli Timoner and Air Florida needed help.

Using his Dallas business contacts to bring new capital investment into Air Florida, Acker became Air Florida's new president by purchasing controlling interest in the airline for only $1.5 million in July 1977 with Eli Timoner becoming its chairman. At the time Acker came to Air Florida, the shoestring operation flew only three Lockheed Electras. Acker immediately began to pick up jet aircraft second hand all over North America to replace the Electras, first with DC-9 Series 10s, then Boeing 737-100s and 737-200s. Acker had the airline's colors revamped from orange and blue to blue and green. Inflight service was overhauled and ever the marketing wonk, Acker introduced orange juice with champagne called "Sunshine Sparklers" on Air Florida flights. Certain passengers could fly for free on new routes by getting a "Sunshine Kiss" by kissing a designated "Kiss Miss"- an attractive airline employee at the gate. Southwest's style of pricing discounts was introduced with deep price cuts for flying during off-peak hours. Within the first year, passenger numbers doubled. And they kept on growing.

And then came deregulation. Air Florida was no longer constrained to just serving the state of Florida. Acker carried an OAG in his pocket that was dog-eared and well-worn and he'd thumb through it thinking of new cities to connect. Any city that got a service cut back inevitably got Air Florida service. When Pan Am acquired National, Pan Am got National's route authority between Miami and London and Acker got DC-10s to compete with Pan Am to London. First class seats were covered in sheepskin and free limo service in a Rolls-Royce was available in London. No promotion, no level of service escaped Acker's attention.

Soon the press was lauding praise on C. Edward Acker as one of the darlings of deregulation and he got what in retrospect was an ill-conceived reputation as a "turnaround king" for what he was doing with Air Florida. In 1981, two years after the acquisition of National Airlines, Pan Am was still bungling the merger and had to drastically cut back its services between New York and Florida that had been one of National's traditional trademark services. Practically overnight Acker threw half of Air Florida's fleet into that market and snapped up even Boeing 727s to augment the rapid expansion. Only Eastern at the time had a larger market share than Air Florida in 1981.

And all of it was ballooning Air Florida's debt.

Not one mention in Wall Street or amongst industry analysts was made that Air Florida's debt was growing at a time when interest rates were high and the company's bottom line was actually being subsidized by Acker's financial dealings on the foreign currency market as well as the stock market. No, the meteoric rise of Air Florida won it and Acker praise in the financial press- Acker's a genius! Acker and Air Florida are corporate success stories!

In August of 1981, Acker was in New York City to speak to a group of industry analysts for several Wall Street brokerage firms. Expecting an in-depth analysis of Air Florida's operation and finances, Acker rose to the podium and told all of them that he wasn't able to discuss the financial affairs of Air Florida with them. "I talked to Cunard Lines and told them I was interested in a job as captain of the Titanic. They informed me that I was too late. Not having that challenge available, I decided to try to find one comparable to that. And so I am accepting the chairmanship of a company called Pan American World Airways."

With that, he turned over the podium to Eli Timoner and left. On 1 September 1981 he took over from William T. Sewell at Pan Am. One of Acker's first acts as head of Pan Am was to re-institute all of the flight cutbacks Sewell had made on the New York-Florida market- the very same market he threw Air Florida into with gusto. Eli Timoner now found the airline he started saddled with a massive debt and facing a reinvigorated Pan Am juggernaut determined to drive Air Florida out of business.

And then, one snowy January afternoon in 1982, a tower controller at Washington National cleared an Air Florida flight: "Palm 90, taxi into position and hold. Be ready for an immediate. No delay on departure, if you will."

Within days of the Air Florida crash in the icy Potomac River, approximately 100,000 reservations on Air Florida were canceled. Weeks later, Eli Timoner suffered a stroke and Donald Lloyd Jones from American Airlines was brought in. Jones was edged out at American by Robert Crandall to run American. But it was too late for Jones to save the airline. Acker's foreign currency trading was no longer boosting Air Florida's bottom line. Acker's marketing engine was sucking passengers from Air Florida to Pan Am in droves. Within several weeks $14 million in profit evaporated and creditors moved into seize the airline's assets. The airline even got slapped with an IRS tax lien. That year, Air Florida suffered a $78 million loss. Two years of massive downsizing stripped Air Florida to the bone.

On 3 July 1984, an airline that went in five years from an intrastate carrier with three airplanes to one that spanned the eastern United States, Europe, and the Caribbean declared bankruptcy and abruptly grounded all of its aircraft and sent all of its employees home. Thousands of passengers were stranded on the Independence Day holiday weekend. After weeks of deliberations in bankruptcy court, Air Florida failed to come up with a restructuring plan as it lacked flexibility as most of its assets were already encumbered with debt and all it had left that were worth anything were its routes to Europe and its slots at New York La Guardia and Washington National. The airline reached out Midway Airlines for a rescue plan that involved financing with the eventual acquisition of the airline by Midway, but the deadlines set by the bankruptcy court could not be met and Air Florida faded into the history books of aviation enthusiasts.

And Ed Acker? What happened at Pan Am will be story for another day!

Source: Hard Landing: The Epic Contest for Power and Profits That Plunged the Airlines into Chaos by Thomas Petzinger, Jr. Three Rivers Press, 1996, p201-208.
at 22:21