The Very Unique Dornier Do 212 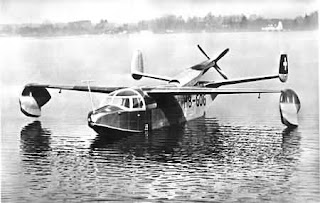 One of the more unique flying boats to be built was the Dornier Do 212 which began its water trials in 1942. Design work on the Do 212 began in 1938 at the Dornier-Werke facility in Freiderichshafen, Germany in collaboration with Dornier's Switzerland-based subsidiary who would be responsible for construction of the prototype with the Swiss registration HB-GOG.

The most unique aspect of the Do 212 was that it had a four-bladed pusher propeller in the tail that could be pivoted upward 12 degrees on takeoff. An extension shaft with a flexible joint connected the propeller to the mid-fuselage mounted piston engine, a 460-horsepower Hirth HM512B 12-cylinder powerplant located immediately behind the four-seat cabin. The monoplane wing had fixed floats on the wingtips that formed endplates which were planned to contribute to directional stability in flight. Initial water trials took place on Lake Constance in Switzerland, the Do 212 being towed behind a boat for the first series of tests. As a result of some stability issues on the water, extensions were added to the bottom of the wingtip float/endplates.

A short hop off the water was made in August 1942 but the pilot had to abort and land immediately due to instability in the air. Technical issues with the extension shaft and getting adequate cooling to the Hirth engine resulted in the program being canceled and the Dornier Do 212 being scrapped before any further flight testing was conducted.

Email ThisBlogThis!Share to TwitterShare to FacebookShare to Pinterest
Labels: Do 212, Dornier, Germany, Switzerland