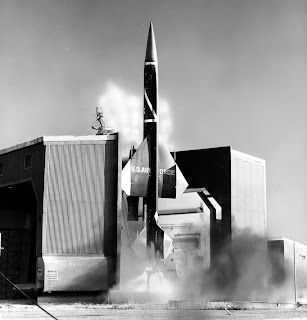 The CIM-10/IM-99 Bomarc was one of the first very long range surface to air missiles to go into service, becoming operational with NORAD for the air defense of North America in 1959. Housed in a rectangular semi-hardened shelter, on receiving the launch order the shelter's roof would slide open and the Bomarc would be raised into the vertical launch position. An Aerojet General LR59 liquid-fueled booster rocket would accelerate the Bomarc to over Mach 2.5 and 60,000 feet when the twin Marquardt RJ43 ramjets took over to propel the missile to over 200 miles out from launch where its 10-kiloton W40 nuclear warhead would destroy the target bombers.

The booster rocket of the missile used hypergolic fuels- red fuming nitric acid as an oxidant and aniline fuel that would spontaneously ignite when mixed. The fuels were stored on the missile for 90 days at a time. When a launch order was received, a helium tank on the missile would be pressurized to provide propellant tank pressurization for the booster rocket. It would take 15 seconds to pressurize the tank, during which time the Bomarc was raised to the vertical position for launch. At the end of each 90 day period, the missile would have to be defueled, decontaminated and then refueled. Pressurized helium would be used to empty the tanks to defuel them as well as in the refueling procedure.

On 7 June 1960 the firefighting department of Fort Dix and McGuire AFB, New Jersey received an emergency call that a fire had broken out in Bomarc Shelter #204. The missile in that shelter was nuclear tipped and the failure of a helium tank set up a pressure shockwave that ruptured the booster rocket propellant tanks, spilling the hypergolic fuels and starting a fire. The fire then heated the remaining fuel in the missile, causing an explosion. Fortunately the shelter roof doors were closed and took the brunt of the propellant explosion, but the steel roof and blast doors were still blown off the shelter and the fierce fire burned for 45 minutes. The missile and launch equipment were destroyed and the fire was so intense the steel structural beams of the launch shelter sagged from partially melting.

Fortunately the hardened shelter design contained most of the explosion and debris and the adjoining launch shelters were undamaged. Water had to be pumped on the remains of the shelter and missile through the night before it cooled down enough for radiation safety teams from the Atomic Energy Commission and the USAF to survey the damage. As the fire had to burned, the structure of the missile melted and the nuclear warhead fell right into the fire and was itself partially melted. Careful study of the remains of the warhead showed that between 2 to 11 oz of plutonium were lost but the tritium tank that held the heavy hydrogen isotope to trigger the nuclear reaction was intact.

The plutonium caused radiation counts inside the remains of the shelter to soar to 2 million counts per minute as the salvage teams had to wear protective gear. What was left of the floor and shelter were sprayed with a special thick paint that absorbed the radiation (thankfully there was no high energy gamma radiation from detonation of the warhead) and four inches of concrete were poured on the surrounding area until detected radiation counts were zero. The site remained fenced off until the Bomarc missiles were decommissioned in 1972. In 2004 the USAF had the site demolished and had 20 feet of soil surrounding the shelter excavated. The soil and the debris were shipped out to a nuclear waste repository in Utah.