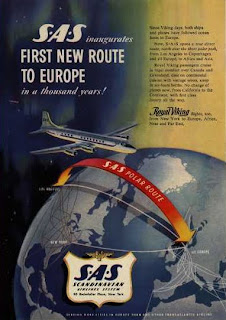 Only seven weeks after being established on 1 August 1946, Scandinavian Airlines System (SAS) inaugurated its first long-haul services across the Atlantic with Douglas DC-4s from Stockholm to New York La Guardia via Copenhagen, Prestwick, and Gander for a flying time of 25 hours. The New York services quickly become profitable for SAS and despite an expansion of its international network to South America and Asia in the years that followed, the US market remained SAS's most profitable overseas destination. Wishing to expand its network to the US West Coast (San Francisco and Los Angeles), SAS didn't want to put its DC-4s on a long transcontinental run across the United States after a trans-Atlantic crossing.

Route planners decided the best "short cut" was a polar flight on the Great Circle Route from Scandinavia to California. But it was 1947 and the most advanced aircraft in the SAS fleet, the Douglas DC-4, didn't have the range. Even more problematic, no airline had ever operated in the polar regions, so in that year SAS set out on a series of trial flights to gain polar operating experience as well as refine polar navigational techniques. Since magnetic compasses didn't work in the regions around the North Magnetic Pole, SAS worked with US avionics manufacturer Bendix to create a precision gyro compass to replace the traditional magnetic compass. During the summer months, the sun would prevent use of a sextant for stellar navigation, so the airline worked with another US avionics company to develop a solar compass that used polarized light to determine the direction of the sun. The airline also developed its own polar charts that laid down a grid over the polar region with the Greenwich meridian as the starting point.

Having created the navigational aids, SAS then set about establishing radio stations across Norway, Greenland and Northern Canada since the only existing radio stations in the region were for military use only. In 1952 sixty trial flights were conducted using the new Douglas DC-6 between Copenhagen and Sondre Stromfjord in Greenland. In December of that year SAS took delivery of its first long-range DC-6B in Long Beach, christened "Arild Viking" and flew it from Long Beach to Copenhagen via Edmonton and Thule. The trip took 28 hours and was the first commercial flight over the Arctic.

With all the pieces in place, all that awaited were route authorities from the United States. The first rights granted were only to Seattle, but persistence on the part of the Los Angeles Chamber of Commerce gained SAS its prized rights to that city. Specially provisioned with Arctic survival equipment, the SAS DC-6B "Helge Viking" departed Copenhagen for Los Angeles on 15 November 1954 via Sondre Stromfjord and Winnipeg. Taking off from Los Angeles and headed in the opposite direction was the DC-6B "Leif Viking".

On 24 February 1957 SAS made its first flight over the North Pole with services between Copenhagen and Tokyo via Anchorage, saving 18 hours and 2,400 miles over previous routings that passed via the Mediterranean and South Asia. That same year, SAS introduced the Douglas DC-7C on its polar routes and the flying time between Copenhagen and Tokyo was cut from 50 hours to 32 hours. By this time, however, SAS's monopoly on the polar routes was over as Canadian Pacific, TWA, Pan American, and BOAC introduced services using the "short cut" over the Arctic region.

Pure jets were introduced by SAS on the polar routes with the Douglas DC-8-33 in 1960, then the DC-8-62 in 1967 and the DC-8-63 in 1968. In 1974, widebody service arrived on SAS polar services with the introduction of the Douglas DC-10. With the liberalization of travel markets, deregulation in the United States, the end of the Cold War (which opened up Russian airspace) and open skies agreements, the polar routes have diminished in importance for SAS but there is still nonstop service between Copenhagen and Tokyo taking only 11 hours.