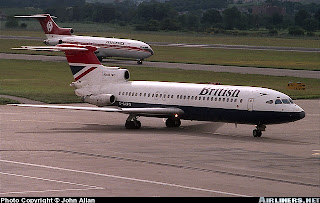 One year before Boeing announced the go-ahead of the Boeing 727 program on 5 December 1960, there were serious reservations within the manufacturer about whether or not to proceed with the 727. At the time Boeing's commercial division was still quite a bit smaller than the military aircraft division and the company's desire to have wide customer base resulted in numerous variations in the Boeing 707/720 family that stretched the company's resources to the point that for every 707 delivered, Boeing was taking a $1 million loss. At this point, the De Havilland in Britain was about a year ahead of Boeing on work on its own trijet, the DH.121 Trident which was designed to broadly meet a similar set of specifications as that of the 727.

De Havilland saved itself a lot of time as it was specified from the start to have three engines while Boeing's design studies alternated between four and two-engined designs before settling on three engines. Before a T-tail design was settled upon for the 727, a group of Boeing engineers visited De Havilland's Hatfield factory to review the progress on the Trident and the visit was reciprocated shortly afterwards when a group of engineers from De Havilland visited Boeing's Seattle facilities to review the progress on the 727. At this point, the British firm suggested an Anglo-American alliance with Boeing building the Trident under license and worldwide sales markets divided between the American Trident team and the British Trident team. De Havilland would have a bigger customer base and lower unit price for its Trident design and Boeing wouldn't have to commit what was estimated to be $100 million to get the 727 program to completion of the prototypes and first flight.

As surprising as it may sound today, Boeing was very unsure of itself in the commercial market and the De Havilland proposal offered a low-risk way of getting into the short-haul market and there was a considerable amount of convergence in the two designs. However, Boeing wanted the capability to operate from a 5,000 foot runway, a specification that didn't factor into the Trident design (as a matter of fact, the Trident's early versions had a reputation amongst pilots as "ground grippers"). The two teams then looked at the possibility of putting the 727's high lift wing on the Trident, but the costs of the engineering required were identical to that of proceeding with the 727 program. The proposal for the alliance quietly died and to many at De Havilland came as no surprise.

When the 727 was rolled out, there were accusations in the British press that it was copied from the Trident, but De Havilland's engineers were adamant in interviews in dismissing the furor and reminded a skeptical public that Boeing did have first-class wind tunnel facilities and some of the finest aerodynamicists and engineers in the world would would have arrived naturally at some of the conclusions that resulted in the layout of both aircraft!