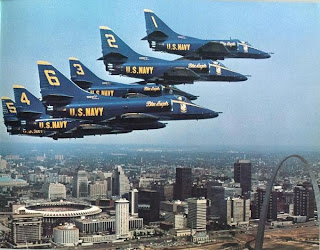 After a series of accidents and maintenance problems with their McDonnell Douglas F-4J Phantoms in the 1973 air show season, the Blue Angels canceled the rest of the season and stood down for an overview of the program by the Secretary of the Navy, John Warner (who would later serve six terms in the US Senate representing the state of Virginia). Warner appointed a panel of six senior flag officers to review the Blue Angels program and they unanimously recommended its continuation as "prime recruiting asset" and the Chief of Naval Operations, Admiral Elmo Zumwalt, wanted a reorganization of the Blue Angels and instituted a review for an aircraft type to replace the F-4s.

Former Blue Angels team leader Captain Ken Wallace, who at the time was in charge of tactical air planning in the CNO's office, was appointed to make recommendations on a new aircraft type for the demonstration team. He preferred the Grumman F-14 Tomcat, which was the Navy's prime fighter aircraft, but the cost of the keeping the aircraft ready for flight demonstrations and maintaining the costly AWG-9 radar and Phoenix missile weapons system flight ready were daunting. At that time the flight control system was also undergoing refinement as well as the fighter was being introduced into service.

The next choice in Wallace's evaluation was the Vought A-7 Corsair II, then the Navy's newest front-line attack aircraft, but they couldn't be spared as they were needed in Southeast Asia even as US involvement in Vietnam was winding down as units replaced older Corsairs and combat losses. This finally led to the selection of the McDonnell Douglas A-4 Skyhawk, specifically the A-4F variant. Approximately 150 A-4Fs were built to stand-in for the A-7 Corsair II in some of the Navy's attack squadrons as there were operational problems in getting the A-7 ready several years earlier. Now that the A-7 was a mature system, the A-4F was in plentiful supply and particularly appealing to the Blue Angels were the 100 F-models that were re-engined with a more powerful version of the J52 engine that boasted 11,200 lbs of thrust compared to 9,300 lbs of the older version of the J52 that most Skyhawks used- this gave the "Super Fox" as the re-engined A-4Fs were called, a near 1:1 thrust to weight ratio, something the Blues never had in a display aircraft.

1. Wing slats were locked into place to prevent asymmetrical slat deployment which would have been disastrous in close formation.
2. Smoke oil tanks added.
3. Modification of internal fuel plumbing to allow an additional 30 seconds of inverted flight time.
4. Horizontal stabilizer altered to allow 3 degrees more of down trim.
5. Modulated stick forces in the pitch axis- one setting for displays and the other for cross-country flying.
6. Stowable crew ladder in what was the left hand gun bay.
7. Removal of the dorsal avionics pod and some of the weapons delivery avionics.
8. A drag chute for use at smaller airports.

The final change was the raise the status of the Blue Angels to that of a full Navy squadron, giving the team leader the same powers and position as a squadron CO. This now meant that the flight surgeon, supply and administrative officers and the public affairs and maintenance teams were no longer loaned to the team.

The Skyhawks debuted in the 1974 show season and flew for the Blue Angels until 1987 when they were replaced by the McDonnell Douglas F/A-18 Hornet.