Mohawk Airlines Gets the BAC One-Eleven 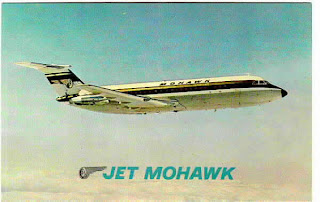 When the BAC One-Eleven was developed, it faced competition from two other short-haul twinjets in the form of the Sud-Aviation Caravelle and the Douglas DC-9 Series 10. And further ahead lay Boeing's 737-100/200. BAC's sales team as soon as the One-Eleven was launched wasted no team in getting themselves set up in the United States, keen to follow on the success of the Viscount turboprop in the world's most lucrative air travel market. However, the BAC sales team found opposition not from the airlines, but from a completely different quarter.

Shortly after the launch of the One-Eleven letters of intent came in from local service carriers Ozark Air Lines (five aircraft) and Frontier (six aircraft). However, the US airlines of the day were tightly regulated by the Civil Aeronautics Board which not only set fares and routes, but also administered government subsidies to maintain "competition". The local service carriers of the day were particularly dependent on the government subsidies for what were usually uneconomic short-haul routes to smaller cities. In the case of Frontier and Ozark, the CAB felt that operating pure jets would require increased subsidies and threatened to withdraw financial support. As a result, Ozark and Frontier had to abandon their plans to buy the BAC One-Eleven.

The following year in 1962 Bonanza Air Lines signed a letter of intent for three One-Elevens. This time the CAB refused to guarantee Bonanza's loan and the purchase had to be canceled. When Bonanza was able to later on order the Douglas DC-9 Series 10 (as well as Ozark), accusations of protectionism flew from the British government and press.

Though success came with Braniff's order for six One-Elevens and options on six more (Braniff was much less dependent on government subsidies), the next local service carrier to order the One-Eleven, Mohawk Air Lines, was determined to make a case for operating the jet. When Mohawk ordered four One-Elevens, the CAB again tried to intervene and prevent Mohawk from getting jet equipment. The CAB stated in their denial that Mohawk's Convair twins carried on average 20 passengers and at least 30-35 passengers would be needed on the One-Eleven to operate without an increased subsidy.

Mohawk's president, Robert Peach, wasn't going to accept the CAB's verdict. In a very detailed rebuttal and analysis written by Peach himself, he pointed out that the CAB had just awarded Mohawk route extensions as well as nonstop route authorities between major cities in the Northeast that brought Mohawk in direct competition with the trunk carriers like American and United. Peach argued that modern equipment was needed to compete on these routes and that failure to acquire jets would mean an increase in subsidy would be needed for Mohawk to maintain those very routes.

Peach then detailed the rationale for the One-Eleven purchase, showing that operating the One-Eleven over a 200-mile route would break even at a load factor of 46%, something he pointed out that Mohawk had easily done historically. Mohawk wasn't getting jets for sake of getting jets, Peach concluded, the airline was doing it to meet economic and customer demand for modern aircraft on its route network.

It was one of the rare victories against the CAB that increased Robert Peach's stature amongst the other local service carriers. The CAB conceded and Mohawk operated their first BAC One-Eleven service on 15 July 1965 between Utica, New York, and New York City.