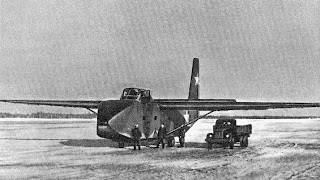 While most nations that had used assault gliders operationally in the Second World War had already abandoned the concept with the end of the war, development continued in the Soviet Union on gliders not only for combat assault, but also for use internally for the delivery of cargo to inaccessible areas of the country. In 1947, the Soviet Air Force issued a specification for an assault glider for use by the Aviation of the Airborne Troops that could transport over 3.5 tons of cargo. Both OKB Yakovlev and OKB Ilyushin were selected to build prototypes- Ilyushin instructed to develop an all-metal design (the Il-32 and was generally unsatisfactory) and Yakovlev's design was to be all-wood and became the second use of the designation Yak-14 (the first Yak-14 was the original designation of the Yak-10 light liason aircraft and was one of the reasons the NATO code name system was created to avoid confusion).

The Yak-14 had a wooden structure with fabric skinning with a hinged nose section as well as a hinged tail section, both of which could be swung to one side to allow straight-through loading and unloading to a square-section cabin with a floor strong enough to carry tracked vehicles. The cockpit was curiously offset to one side and was above the cabin and the high-mounted wing. Up to 35 fully-equipped troops could be carried.

Flight testing of the Yak-14 began in 1948 with the planned tow aircraft either a Tupolev Tu-2 light bomber or a Ilyushin Il-14 transport. In March 1954 four Yak-14s were used to deliver heavy equipment to a research station on an ice floe in the Arctic Ocean, becoming the first glider to overfly the North Pole in the process.

With the arrival of twin- and four-turboprop transports from Antonov in the late 1950s, the Yak-14s were phased out as the last assault gliders in operational use. Approximately 413 were constructed and assigned the NATO code name "Mare".