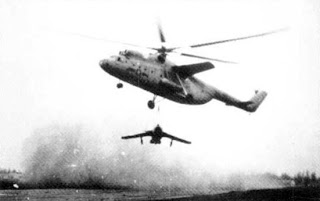 In the spring of 1966 the airbases of the Vietnamese People's Air Force (VPAF) were targeted for the first time by American aircraft. Previously considered off-limits by Washington (and later in the war the bases were not allowed to be attacked), the attacks on the MiG airfields at Dong Hoi and Vinh forced a rethink of North Vietnam's air strategy against a numerically superior American military.

To provide rapid repair of the airfields, over 70,000 steel-reinforced concrete plates were stockpiled at the airfields. Large amounts of bamboo stems were also stockpiled to be used in airfield repairs. Camouflaged revetments were created and some were even disguised as huts along with the construction of underground command centers for the base staff. To protect the VPAF's small MiG-17 force, the aircraft were dispersed out into the country side, carried by large Mil Mi-6 helicopters to the dispersal sites and carried back to the airfields when missions were to be flown. Later in the war, fuel and ammunition were also dispersed at these sites as it was found an Mi-6 could carry a fully-fueled and armed MiG-17 to the airfields from as far away as 30 miles. Underground shelters were built into the mountains near the bases where the aircraft were prepared for their missions against incoming American strike packages. An Mi-6 would then carry the fighter as an underslung load to the nearest airbase where it would take off, fly the mission and then return to base to be carried back to the underground shelters miles away by the helicopters.

In areas where the terrain prevented construction of underground shelters for the MiG force, the fighters were dispersed into villages and agricultural co-operatives as well.
Source: Wings of Fame, Volume 8. Aerospace Publishing, 1997. "MiG-17 Over Vietnam" by Zoltan Buza and Istvan Toperczer, p106-107.
at 13:19