The Politics Behind the French Stratotanker Purchase 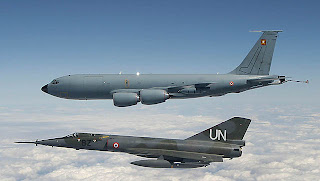 On 13 February 1960 France exploded its first thermonuclear weapon, a 60-kiloton device in the Algerian desert, making France the fourth member of nuclear-capable powers. In December of that year, President Charles De Gaulle formally announced his intentions to establish an autonomous nuclear strike force independent of US control based on the Dassault Mirage IV supersonic strike bomber which had made its first flight the year prior.

But the Mirage IV lacked the range to reach targets in the Western Soviet Union and defense planners in the Armee de l'Air (AdA- French Air Force) wanted to acquire an aerial tanker that could launch at a moment's notice with the Mirage IV force, refuel the bombers at high speed and high altitude, and offload fuel quickly to the Mirages. Only the Boeing KC-135 Stratotanker met these stringent requirements and negotiations began to purchase 10 KC-135As- 9 tankers for every four Mirage IV in the Force de Frappe (Strike Force) plus one spare. However, with the 1960 election of John F. Kennedy came a change in US nuclear strategic doctrine from massive retaliation to one of flexible response- to the new US president, his Secretary of Defense Robert McNamara, and his Secretary of State, Dean Rusk, an autonomous French nuclear deterrent would undermine the new strategic doctrine and increase the chance of premature use of nuclear weapons without American oversight.

The sale of the KC-135 to France was seen as equal to nuclear proliferation as the tankers were necessary for the Force de Frappe to reach Soviet targets. By 1962 France increased its Mirage IV force to 50 aircraft and wanted more than just 10 tankers which were agreed on principle by military officials in the US Defense Department. President Kennedy, however, vetoed the sale and even announced at a press conference that the tanker sale was a dead issue. On that very same day, however, the Deputy Secretary of Defense Roswell Gilpatrick approved the sale of 12 KC-135s to be designated C-135FR (ostensibly to hide their purpose as tankers for the Force de Frappe).

Two weeks later at a commencement address at the University of Michigan at Ann Arbor, Defense Secretary McNamara reiterated official US policy of opposing any aid that allowed an independent French nuclear deterrent. Despite this, a month later, both McNamara himself and Secretary of State Dean Rusk signed off on the tanker sale worth $50 million. At the time the sale was rationalized as an offset for American gold losses to France and concern by the US Treasury Department about foreign accumulation of gold. However, with the end of the Cold War, declassified documents show the sale was undertaken quietly in an effort to improve strained relations between France and the United States.

The first AdA C-135FRs arrived in France at Istres in 1964 following completion of KC-135 crew training by the French at Castle AFB in California. The last C-135FR arrived in October of that year which coincided with the Force de Frappe's first operational Mirage IV nuclear alert. Initial Mirage IV operations included a 24-hour airborne alert of Mirage IV bombers supported by the C-135FRs, but these were ended in 1967 as they could not be afforded by France unlike the US Strategic Air Command's "Chrome Dome" airborne alert.

In 1966, President De Gaulle went ahead and pulled France out of NATO's military command, an action that was only reversed in March of 2009 when President Nicholas Sarkozy signed a decree supported by the French legislature re-integrating France into NATO.