The First Serious Proposal for Air Refueling on a Combat Mission 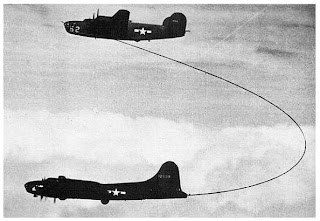 The first serious proposal to use air-to-air refueling in a combat mission came in early 1942 just weeks after the Japanese attack on Pearl Harbor. The United States wanted to strike back as expeditiously possible at Japan and early efforts focused on the US Army Air Corps inviting the British firm Flight Refueling Ltd to send some engineering staff to Wright Field in Dayton, Ohio, to discuss converting the Consolidated B-24 Liberator into a tanker and the Boeing B-17 Flying Fortress into a receiver aircraft. The USAAC (soon to become the US Army Air Forces) ordered on set of inflight refueling equipment similar to what Flight Refueling used in its 1939 trans-Atlantic trials.

With the assistance of Flight Refueling engineers, Pennsylvania Central Airlines modified a B-24 and a B-17 with the refueling equipment (PCA would later be renamed Capital Air Lines which was then absorbed by United Air Lines in 1961). By April 1943 the first flight trials were conducted at Eglin Field in Florida. By this time, however, the Doolittle raid on Tokyo had already taken place but the USAAF wanted to further examine the feasibility of air refueling in strategic bombing operations.

At the conclusion of the tests, the B-17's range with a full bomb load could be extended to 5,800 miles (compared to its standard 2,000 mile range). Plans were conceived to have B-17s based in the Aleutian Islands and strike Japan with air-refueling, proceed on to bases in China and then reverse the process. However, the time needed convert and train sufficient bombers and crews to sustain a strategic bombing campaign on Japan were seen as too long with Boeing getting ready to produce the B-29 Superfortress and Admiral Nimitz's successes in the Central Pacific in securing possible islands to use as bomber bases.