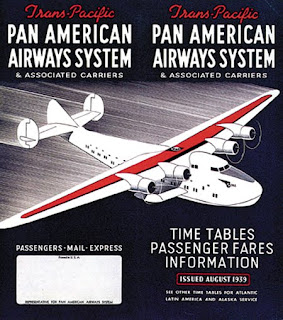 When Pan American signed a $4.8 million order with Boeing for six Model 314 flying boats with options on an additional six, at the time in the 1930s it was the most expensive airliner sale yet with a cost of $512,000 per flying boat, five times the cost of a Douglas DC-3. Not only did Boeing manage to break into the large transport aircraft market for the first time with as prestigious a customer as Pan American, but the Boeing 314 was a quantum leap on performance and luxury over the previous Martin and Sikorsky models the airline was using on its worldwide network.

The Boeing 314 boasted a 3,500 mile range (with a wing based on that of the Boeing XB-15) with a cruising speed of 183 mph and carried up to 74 passengers in ocean liner luxury. Boeing engineer Wellwood Beall who supervised the Model 314's development, even included a bridal suite and spiral staircase connecting the upper and lower decks of the spacious flying boat. Pan Am chairman Juan Trippe was so enamored with the interior accommodations of the 314 that despite the delays in the program, he refused to invoke the contractual penalty clauses in the contract. Trippe even ignored his most famous technical advisor, Charles Lindbergh, who was unhappy with the Boeing 314's design as he didn't believe Boeing could build commercial aircraft.

But the least-publicized groundbreaking feature (and the one Wellwood Beall was most proud of) was that the Boeing 314 was the first airliner to have flushing toilets. Beall himself was responsible for the design of the flying boat's toilets. When the seat lid was closed, the bowl of the toilet sat inside a rotating drum that turned 180 degrees to upside down which emptied the toilet bowl's contents out a vent into the sea and then righted back up again for the next passenger.

The toilet, however, nearly caused a rift between Wellwood Beall and Andre Priester, a fiery Dutchman who was in charge of Pan American's engineering department. On the inaugural Boeing 314 flight from San Francisco to Honolulu, Beall was an invited guest on board and was asleep in his berth when Priester angrily woke him up to complain that neither of the airliner's two toilets were working. Beall managed to get them working again, but on the return flight to the mainland, the toilets malfunctioned again and this time Beall couldn't get them fixed. Priester was furious and Beall hurried back to Seattle to consult with Boeing's engineers. They were mystified- they'd tested the design for over a year and were confident that it would work flawlessly.

It turned out that the the toilet paper Pan American was using was quilted and thicker than what Boeing used in its tests. The thicker and heavier Pan American toilet paper would clog the system and prevent the drum in the flushing mechanism from rotating. It's said that it was one of the few times in Andre Priester's career that he laughed and admitted he was wrong!