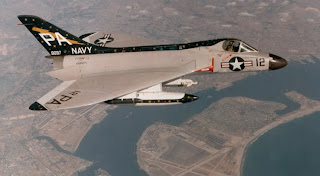 Though notoriously short-legged and cursed with less-than-ideal handling, the Douglas F4D Skyray was famous for its climb performance. In 1958, Marine Corps Maj. Edward N. LeFaivre shattered five world records in the time-to-height category by flying a Skyray from NAS Point Mugu to 49,212 feet in only 2 minutes and 36 seconds. Designed to intercept high flying bombers attacking a carrier battle group, the Skyray's hot climbing performance made it the only Navy fighter to be formally assigned NORAD air defense duties as a land-based interceptor.

On 2 May 1958 All-Weather Fighter Squadron THREE (VFAW-3) was formed at NAS North Island, San Diego to stand air defense alert for the southern US West Coast. Wearing the tailcode "PA" and an attractive blue spine and tail with yellow stars, NORAD's shield was in the squadron's North Island hangars but not on the aircraft themselves. Armed with four 19-shot rocket pods and later Sidewinder missiles, VFAW-3's Skyrays were a leap on capability over the F9F Panthers and F3D Skynights that were originally proposed by the US Navy to serve NORAD alert on the US West Coast.