The First Torpedo Bomber: The Shorts 184 of the First World War 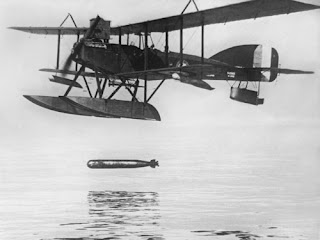 Captain Murray F. Sueter, Director of the Air Department of the Admiralty of the Royal Navy, was one of the most enthusiastic proponents of British naval aviation during the First World War. One of his most passionate causes was championing naval torpedo bombers, though in those days a "proper" torpedo bomber was felt to be a seaplane. Working with the Short Brothers, a large two-seat biplane called the Short Type 184 was produced in significant numbers (650 in all) during the First World War. With a pilot and observer and floats, the 225-horsepower Short 184 was the first reliable torpedo bomber to not only go into production, but to prove itself in combat.

Despite successful tests showing that it was possible to air drop a torpedo against a surface vessel, Captain Sueter's ideas got little support within the Admiralty. However, he was given a chance to prove his theories with the Short 184 during the disastrous Dardenelles Campaign on the Gallipoli Peninsula against Turkey in 1915. Four Short 184s were embarked aboard a converted steam packet to serve as a seaplane tender, arriving on station in the northern Aegean Sea in June 1915.

On 12 August 1915, Flight Commander C.H.K. Edmonds and his observer flew a Short 184 carrying a single torpedo toward the Straits of the Dardanelles. Sighting a Turkish freighter in the Sea of Marmara that was carrying 3,000 Turkish troops to reinforce the Gallipoli Peninsula, Edmonds slowly descended from 800 feet to only 15 feet and closed within 300 feet of the vessel before releasing his torpedo, which struck the troop transport amidships, making the world's first successful combat aerial torpedo attack.

Five days later Edmonds and his observer again sortied in their torpedo-armed Short 184 along with a second Short 184 piloted by Flight Lieutenant G.B. Dacre. Approaching the Turkish coast at low altitude, both aircraft came under ground fire from Turkish gun batteries on the coast. Weaving at low altitude, Edmonds sighted three Turkish merchant ships and homed in on the largest of the three vessels, again descending to near-wavetop height for torpedo release, scoring a direct hit that set the vessel ablaze.

Edmonds' wingman found himself forced down due to an engine failure. While on the water getting his engine re-started, Dacre noticed a Turkish steam tug cross his nose and he fired his torpedo while still sitting in the water. The torpedo hit the tug squarely and sank it immediately. Having finally gotten his engine restarted, Dacre nursed his Short 184 into the air under heavy fire.

Despite this success, the Admiralty remained lukewarm to Sueter's ideas. He had requested a force of 200 torpedo bombers to act in conjunction with the Grand Fleet in the North Sea in action against the German High Seas Fleet, but his ideas were considered too radical and risky for the Royal Navy. Sueter then proposed using the Short 184 to attack the High Seas Fleet at anchor at Wilhelmshaven, but again was rejected. He then proposed an attack on the Austro-Hungarian fleet at its naval bases on the Adriatic- he managed to win over the First Sea Lord, Earl Jellicoe, who approved the deployment of Short 184s to a seaplane base in Italy to attack the Austro-Hungarian fleet at anchor at its main harbor base in Pola.

The attack was to take place on 2 September 1917 but on the eve of the operation a storm arose and the aircraft were unable to depart. The attack was postponed indefinitely and not resurrected before the war ended in 1918 as many in the Royal Navy felt that the seaplanes were better used for scouting and reconnaissance than for attacks on surface vessels.