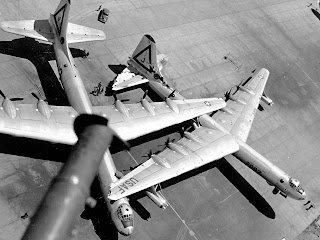 Prior to the arrival of the Boeing B-52 Stratofortress, the responsibility for the long-range strategic deterrent of the United States rested with the Convair B-36 Peacemaker in the 1950s. The Atlas ICBMs were still years away from becoming operations and the first Polaris submarine-launched ballistic missiles were still on the drawing boards. The other bombers of the USAF's Strategic Air Command, the Boeing B-50 Superfortress and the Boeing B-47 Stratojet, were medium range bombers that could not strike Soviet targets from the United States. Only the B-36 had the range to reach the Soviet Union and the capacity to carry any of the nuclear bombs in the US stockpile.

As the B-36 was built and flight tested in Fort Worth at Convair's mile-long plant at Carswell AFB, the first of SAC's bomb wings to receive the Peacemaker were based at Carswell. The 7th Bomb Wing was the first to put the Convair's "big stick" into service, followed by the co-located 11th Bomb Wing. With Convair right across the runway at the base, any technical problems could be readily addressed. As a result, the majority of the United States' long range striking power was concentrated in Fort Worth.

On Labor Day, 1 September 1952, many of the base personnel and flight crews had the long weekend off. Weather forecasters had predicted severe thunderstorms for North Central Texas that afternoon with estimated winds of 60mph. As few personnel were on duty, few precautions were taken other than securing the B-36 aircraft with 3/8 inch steel cables. At 6:42pm, a tornado touched down on the base perimeter and struck the B-36 flightline directly. Maintenance docks used to work on the large bombers outdoors were thrown about and the steel cables tying down the bombers snapped as the planes were thrown about by the tornado like toys. Ruptured fuel tanks spilled thousands of gallons of high octane avgas all over the ramps. The anemometer on the Carswell control tower registered sustained winds over 90mph before being torn away by the storm. As the storm subsided, operations had to be transferred to nearby Meacham Field and other bases in the Southwest.

Two-thirds of the entire B-36 Peacemaker force was either damaged or destroyed in the tornado. One aircraft was completely shattered and would have to be written off while 72 bombers on the flightline and adjoining aprons were damaged and unflyable. Fortunately there were no fatalities given the long holiday weekend. Another 10 B-36s parked at the Convair plant were also damaged. Some of the bombers were shoved on top of each other and many had lost wings, empannages, or large fuselage sections. Because of the national priority placed on the B-36 fleet, by 5:30 the next morning a repair plan was underway with 1/3 of the repairs to be carried out by SAC, 1/3 of the repair work to be done by repair teams dispatched from Kelly AFB in San Antonio (the site of one of the USAF's heavy logistics centers), and remaining 1/3 would be carried out by Convair. So urgent was the matter than a 1-page typed letter was the basis of a multi-million dollar contract for Convair for its share of the repair work. Project FIXIT returned one bomber to operational service the first week, and nine more B-36s in the second week after the tornado. In less than a month, the 7th Bomb Wing was back at full operational strength of only one B-36 had to be written off out of the 83 damaged. By the end of the month, the round-the-clock effort had the 11th Bomb Wing operational and by the first week of October, 51 more aircraft were returned to service. The last repaired B-36 returned to duty on 11 May 1953.

Having 2/3 of the B-36 force knocked out in less than 30 minutes taught SAC a lesson. Each time severe weather threatened Carswell AFB, as many B-36s as possible were flown out to other bases and would return the next day.

Senator Lyndon B. Johnson of Texas and his Military Preparedness Committee conducted an investigation that concluded the base commanders had taken all the adequate measures proscribed at the time with an approaching storm. The investigations called for improved weather forecasting and an increase in the research of tornadic thunderstorms which over the years would not only benefit the USAF, but the general public as well.