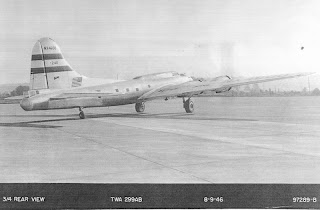 Although in excess of 25 different versions of the Boeing B-17 Flying Fortress had flown since its first flight prior to the start of the Second World War, one of the most unique versions would have to be the only B-17 to be operated by US major airline after the war ended. During the war, many US airlines contributed to the war effort by training pilots, carrying priority passengers and delivering cargo to far-flung destinations well beyond their traditional domestic route networks. Immediately following the Japanese surrender in 1945, the airlines began the process of gearing up for normal civilian operations as rapid demobilization was the order of the day. One of those airlines was TWA, at the time was still known as Transcontinental & Western Airlines but would soon rename itself as Trans World Airlines.

During the war, TWA's five Boeing 307 Stratoliners were put into military service as transports starting in 1942. When they were returned to the airline in 1945, however, they had been heavily used with an untold number of flight hours and for what TWA wanted to do next, the "used" Stratoliners weren't up to the job. In 1946 TWA president Jack Frye and several of his deputies visited one of the RFC (Reconstruction Finance Corporation) depots at Altus AAF in Oklahoma to buy a low-time B-17G Flying Fortress. Several hundred stored B-17Gs were reviewed and their log books inspected. A Vega-built B-17G, 44-85728, was selected as it had very few flight hours on it. In fact, after it was built by Lockheed Vega and delivered to the US Army Air Forces in Burbank, California, it was flown directly into storage.

The sale was finalized on 26 June 1946 and the B-17G was assigned a civilian ferry registration of NX4600 for the flight to Boeing Field in Seattle where it would get conversion work for the role for TWA's mission. Jack Frye also made sure to make the arrangements for TWA to be the owner of a Limited Type Certificate for the B-17. In late 1946 the US Civil Aeronautics Board made these special LTCs available for certain surplus military aircraft that could be sold to civilian owners with the provisions that they not be used for carrying fare-paying passengers or revenue cargo- this restriction was a concession to the aircraft industry which feared that large numbers of surplus aircraft would hurt postwar sales of civilian designs. Most of the LTCs used in the postwar period were used to convert medium bombers into either forest fire-fighting water bombers or executive conversions that were common with the Douglas A-26 Invader and North American B-25 Mitchell.

At Boeing Field, TWA's B-17G was quite literally taken apart as all the military items were removed and extensive soundproofing and comfortable cabin appointments were installed. Additional windows were installed in the fuselage and upgraded avionics, engines, and propellers were installed. Boeing's designation for the B-17 was Model 299 and all the variants had a letter suffix. Since Boeing had already reached the designation Model 299Z, TWA's custom converted B-17G became the Model 299AB. With basic TWA markings and the tail number NL1B, the airline's B-17 would be used for long-range proving flights on prospective routes.

TWA's officials set out on the flights in the newly-converted B-17 and brokered technical and financial agreements with airlines worldwide such as Saudia, Linee Aeree Italiane, Trans-Mediterranian Airways, Ethiopian Airways, and Iran Air. TWA would invest in these airlines and others in exchange for the airlines getting training and maintenance agreements with TWA. In the case of Iran Air, the airline invested in 10% of the Iranian airline and also got a five-year contract to manage Iran Air. On April 1947, TWA's luxuriously appointed B-17 was presented to the Shah of Iran as "deal sweetener" and re-registered as EP-HIM and flown by TWA crews.

Two years later a restructuring of Iran Air led to the TWA contact being nullified and in 1952 the B-17 was sold to the IGN (Institute Geographique National) as F-BGOE for scientific and global mapping survey flights. The IGN used the B-17 until about 1967 and it was scrapped 1972, ending the story of one of the most unique of B-17 Flying Fortresses.