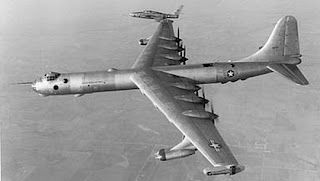 In the immediate postwar period the performance of jet engines was such that they weren't economical and for the nascent USAF needing high performance escort fighters for its bomber fleet, they simply didn't have the range to accompany bombers like the Convair B-36 Peacemaker and the Boeing B-50 Superfortress on their projected missions. While the idea of a parasite fighter like the McDonnell XF-85 Goblin represented one approach, it represented a loss of bombload as the parasite fighter had to be carried under the fuselage, the most ideal location being where the bomb bay was located, near the bomber's center of gravity.

Dr. Richard Vogt, a German engineer who had headed the design work at Blohm und Voss during the Second World War, was brought the United States under Operation Paperclip (which also resulted in Werner von Braun coming to America) and his first posting was with the Air Force Research Laboratory at Wright-Patterson AFB in Dayton, Ohio. While continuing his research on unorthodox aerodynamic concepts there (he had designed the asymmetrical BV 141 while at Blohm und Voss), he developed the idea of increasing the range of an aircraft by attaching free-floating wings to the wingtips of the existing aircraft. Extra fuel tanks formed the body of the wing extensions and the aerodynamic lift from the extensions supported their weight in flight without significant structural penalty to the main aircraft. In addition, these extensions increased the wing aspect ratio, thereby reducing drag and improving the range.

While this idea was first applied to the early candidate designs for the USAF WS-110A program that resulted in the North American XB-70 Valkyrie bomber, the concept also got the Air Force's attention as a means of extending the range of its new jet fighters by substituting escorting jet fighters for Vogt's free-floating wing extensions. In 1949 the first flight trials took place using a Douglas C-47A and manned Culver PQ-14B drones. A simple coupling device allowed three degrees of freedom for the attached PQ-14B- a small ring on a short boom was attached to the wingtip of the C-47 and the PQ-14B had a rear-facing lance that engaged the ring and the drag of the PQ-14B kept it locked on the wing of the larger C-47. To disengage, the PQ-14B pilot simply throttled up and moved forward, sliding the lance out of the ring on the coupler. Since the PQ-14B was supported by its own lift, no structural reinforcements were needed on the PQ-14B or to the C-47 for that matter.

Flight tests began on 19 August 1949 and the first successful coupling was made by Second World War ace Clarence "Bud" Anderson at the controls of the PQ-14B on 7 October 1949. Problems were encountered with the wing tip vortex from the C-47 and the solution was to move the coupler outboard of the wingtip.

The USAF then initiated Project TIP TOW using a Boeing B-29 Superfortress and two Republic F-84 Thunderjets with development assigned to Republic Aviation. Two F-84Ds were modified into EF-84Ds with special wingtips that could attach to a coupling on the modified B-29 which was designated EB-29A. The wingtip vortex from the larger Superfortress made the coupling process hazardous and there were doubts as to whether service pilots with less experience than test pilots could accomplish the process. Despite 15 hours of coupled flying time with both EF-84Ds attached, on 24 April 1953 during the test of autopilot system to lessen the fighter pilot's workload one of the EF-84Ds rolled over onto the wing of the EB-29, causing a structural failure of the left wing and the loss of both aircraft in the process. The pilot of the EF-84D was killed instantly and only one of the five crew on the EB-29 survived.

Despite the loss the USAF persevered and proceeded with Project Tom-Tom- as the design was the brainchild of Major General Thomas Gerrity and Convair manager Tom Sullivan, it was spelled without all caps as was the standard USAF custom for project names. A Convair B-36 was assigned to Project Tom-Tom in May 1954. The coupling provision not only would grapple and hold onto the Republic RF-84F Thunderflashes used in the tests, but they could also provide fuel, power, pressurization and heat to the coupled jets. The first hookup was made on 2 November 1955 but again, the wingtip vortex from the significantly larger B-36 made it a dangerous affair for the pilot of the smaller aircraft. On what ended up being the final Tom-Tom flight in September 1956, Convair test pilot Beryl Erickson found his RF-84F oscillating violently but fortunately for the flight crews involved the coupling broke off and Erickson was able to land safely.

By this point the USAF's parallel experiments in inflight refueling were proving to be more practical and much easier to accomplish with much less risk to the flight crews and the Project Tom-Tom was canceled, ending work on tip-coupling.