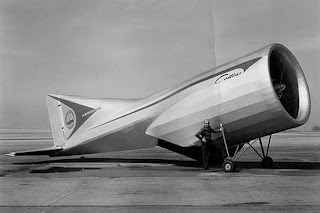 Though renowned German aircraft designer Alexander Lippisch is better known for his delta wing designs and the tailless Messerschmitt Me 163 Komet rocket interceptor, one of his more innovative and unusual designs lacked wings altogether. At the end of the Second World War, Lippisch was one of many German engineers brought the United States under Operation Paperclip (rocket scientist Werner von Braun perhaps being one of the more famous engineers of Operation Paperclip). After spending several years consulting with Convair on his delta wing work that would result in the XF-92, the F-102 Delta Dagger, F-106 Delta Dart and B-58 Hustler, he joined American Collins Radio in 1950 to head its small aeronautical division in Iowa.

It was at Collins he was free to explore other aeronautical concepts and quite possibly his most unusual design was for the wingless Aerodyne. At the time in the early 1950s there was a profusion of VTOL designs, some even reaching the flight hardware state. Lippisch's Aerodyne consisted of an engine within a ducted shroud that exhausted through a pair of vectored cascades that provided both the propulsive lift when in VTOL mode and then shifted via a series of vanes to provide forward thrust while retaining enough of a downward thrust component to stay airborne without the use of wings. A conventional tail unit provided directional control while in forward flight.

As the engine thrust was used for both forward flight and for hovering flight, for an aircraft with similar thrust to weight ratios, the Collins Aerodyne would be faster and more efficient. And compared to the existing VTOL aircraft of the early 1950s that were tail sitters, the Aerodyne remained in a horizontal attitude and would have been much easier to land that the tail sitting designs of the day. Lippisch even claimed with the right amount of thrust, a modified Aerodyne might even be capable of supersonic flight.

Several subscale test models were flown before the full-scale Aerodyne was constructed. While it had provision for a cockpit, it would be flown unmanned to prove the concept full-scale. Co-axial propellers in the ducted shroud provided the thrust for the Aerodyne. In 1959 he received US patent No. 2,918,230 for the Aerodyne. While no documentation exists that the Aerodyne took flight, it was tested at NASA Ames Research Center's large 40 foot by 80 foot wind tunnel. In 1964, though, Lippisch contracted cancer and had to resign from his position at Collins Radio, ending work on the Aerodyne.

He eventually recovered in 1966 and formed his own aeronautical research company in West Germany to further pursue his wingless VTOL ideas and even developed some early wing-in-ground effect designs. In 1968 Dornier developed Lippisch's Aerodyne work into the small E1 drone and flight proved his ideas in 1972.

Source: Straight Up- A History of Vertical Flight by Steve Markman and Bill Holder. Schiffer Publishing, 2000, p72.
at 20:48