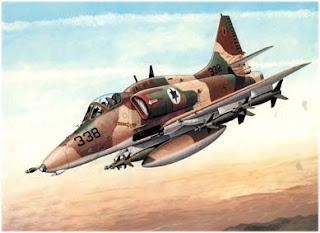 For a better part of the 1950s and 1960s Israel relied on France as its main combat aircraft supplier with the IDF/AF having flown the Dassault Ouragan, Mystere, Super Mystere and Mirage III as well as the Sud-Aviation Vautour in the strike role. But reliance on a single nation for arms worried Israel's government and by the late-1950s increasingly advanced Soviet designs were being purchased by Arab client states and the general perception in the world market was that French designs were falling behind the designs coming from the Americans and Russians. American concerns about growing Soviet influence in the Middle East created an opportunity for Israel to finally get access to American combat aircraft that had previous proven elusive due to diplomatic concerns.

In 1965 Jordan began to finalize purchase of MiG-21s from the Soviet Union, and as a moderate Arab state that had enjoyed decent relations with the United States, found that the Royal Jordanian Air Force would have access to US fighters in an effort to swing Jordan out of the Soviet sphere of influence. The United States offered to sell Jordan the Lockheed F-104 Starfighter and the administration of Lyndon B. Johnson asked the Israelis to not oppose the sale. Israel, sensing a chance to modernize the IDF/AF, stipulated that it would not oppose the sale as long as a similar class of aircraft were sold to Israel.

Throughout the spring of 1965 diplomats from both the United States and Israel met to negotiate a formula that would allow the sale of American arms to Israel provided that the Jordanian deal be allowed to proceed without objections. President Johnson, however, attached the condition that American aircraft would only be sold if comparable types were not available from European nations. The Israelis touched upon their operational requirements during negotiations and insisted upon 75 aircraft as part of the US commitment. Initially the Douglas B-66 Destroyer was offered, but it was quickly agreed to let the IDF/AF experts handle the specifics. Israel's military requirement was for two classes of aircraft, one in the heavy attack class to replace the Vautour and Super Mystere and a light attack class for a replacement of the Mystere and Ouragan. The French duly offered a proposed new version of the Vautour called the Super Vautour and the proposed Mirage F2, but both would not be available by 1970 at the earliest which wasn't acceptable to the IDF/AF. The Dassault Mirage IV was also mooted for an associated reconnaissance requirement, but it didn't fit the scope of the Israeli need. That left primarily American designs in the running.

At the 1965 Paris Air Show, the IDF/AF Chief of Staff, Ezer Weizman, and Yossi Sarig, a former Vautour squadron commander and head of the IDF/AF's operational planning, visited the Dassault chalet for a presentation on the Jaguar as a possible candidate for the light attack requirement. Halfway in the presentation, Sarig whispered to Weizman that the Jaguar would not meet the baseline mission profiles the IDF requested, so Weizman ended the presentation prematurely and walked out with the Dassault delegation angry. He went straight to the chalet of Douglas Aircraft and made arrangements for presentation later that day on the A-4 Skyhawk.

The IDF/AF (Heyl Ha'Avir) called its procurement program Plan Samuel, which called for 30 heavy attack aircraft and 120 light attack aircraft. The aforementioned Douglas B-66 Destroyer was rejected for the heavy attack requirement and the McDonnell F-4 Phantom II, Grumman A-6 Intruder and Vought A-7 Corsair were settled upon as the candidates. The light attack candidates were the Douglas A-4 Skyhawk, the Northrop F-5 Freedom Fighter, and the North American F-100 Super Sabre. Plan Samuel was presented to a joint State Department and Defense Department group in Washington in October 1965 and the reaction by the Americans was quite negative. Too many aircraft were being asked for and it was felt that the Israelis hadn't exhausted their European options yet. Believing that the American option was out, Israel nonetheless found itself engaged in backroom diplomacy as President Johnson wished to honor its commitment to supply Israel with arms given that they had not blocked the F-104 sale to Jordan.

As a result in February 1966 US officials gave Israel their best possible offer which was for 48 aircraft that had to be the least capable of the types that had been short-listed for Plan Samuel. The contracts for the purchase of the Douglas A-4 Skyhawk was signed on 18 March 1966 but was kept secret with the code name Operation Rugby in order to allow arms sales to both Jordan and Saudi Arabia to proceed. Israel had stipulated its own modifications for the A-4 Skyhawk while the United States insisted upon the deletion of specific advanced features like the bombing computers, radar warning systems and AGM-45 Shrike anti-radar missile launch capability. The combination of Israeli requirements and American conditions for a downgraded Skyhawk resulted in a new variant, the A-4H Skyhawk, the last of which was delivered in late 1968.

The purchase of the A-4 Skyhawk represented not just a fundamental change in Israeli defense policy, but it also represented a significant change US defense and foreign policy in the Middle East which up to that point had been one of primarily non-engagement. Spurred on by Soviet inroads and the creation of client states in Syria, Egypt, and Iraq, American foreign policy forever changed in the Mideast with the sale of those Skyhawks to the IDF/AF in the late 1960s.