ACE- The Aviation Combat Element, the Air Wing of the Amphibious Assault Carrier 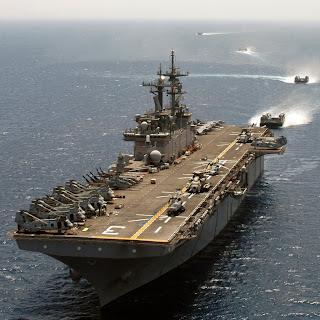 The helicopter amphibious assault ships of the US Navy that transport Marine Expeditionary Units (MEUs) are often called the "big deck amphibs" as their size approaches that of the the aircraft carriers of previous generations. In fact, the latest class of assault carriers, the Wasp-class LHDs, are much larger than the Royal Navy's Invincible-class Harrier carriers and closer in size to ships like the old French aircraft carriers FNS Clemenceau and FNS Foch (size comparison here) Like a supercarrier, the assault carriers have their own air wing embarked with the Marine Corps calls an Air Combat Element or Aviation Combat Element (ACE). But there the difference ends. But let's back up a bit and talk about the MEU and how the ACE fits into the MEU.

Think of an MEU as miniature Marine Corps composed of approximately 2,300 personnel. The MEU is the basic deployable unit of a Marine Air Ground Task Force that integrates the soldiers, artillery, tanks, aircraft and logistcal support to conduct anything from combat operations to humanitarian relief efforts worldwide. There are four "elements" in an MEU- the Aviation Combat Element, the Ground Combat Element, the Command Element, and the Logistics Combat Element. The Ground Combat Element or GCE is centered around an 800-man infantry battalion to which are attached armor, artillery and transport to become a Battalion Landing Team. The Logistics Combat Element or LCE is in charge of keeping the MEU supplied while the Command Element or CE is obviously to run the whole show. The USMC has seven MEUs- three on the US East Coast, three on the US West Coast and one forward-deployed in Japan.

Back to the Aviation Combat Element, or ACE. The ACE is the MEU's air wing. The nucleus of the ACE is either a medium helicopter squadron (HMM) operating Boeing Vertol CH-46 Sea Knights or medium tilt-rotor squadron (VMM) operating the Bell/Boeing MV-22 Osprey. The VMM and HMM squadrons are set up so that other units can be attached to them to form the ACE. The VMM and HMM squadrons form the nucleus as they are the largest squadron in the ACE and have the most personnel and equipment. A normal VMM or HMM squadron might have 200 personnel, but when other units are attached to it like AV-8B Harrier IIs or other helicopter assets, it grows to over 500 personnel and becomes a "reinforced squadron". So for example, VMM-263 is a tilt-rotor squadron flying Ospreys. When the squadron goes to sea as part of an ACE, it becomes "reinforced" and is designated VMM-263 (REIN).

But what is unique about a Marine Corps ACE is that the attached units, whether they're fixed wing Harrier IIs, Super Cobra gunships or heavy lift CH-53Es, all take on the VMM or HMM's squadron identity and tail codes when deployed. So you might have six AV-8B Harrier IIs from VMA-223 that take on the identiy of VMM-263 if that's the squadron they get attached to in an ACE.

Unlike a US Navy supercarrier, the ACE units all have one ready room. The diverse units attached to the nucleus VMM or HMM squadron all brief and train together as a team. Everyone even wears the squadron patches of the VMM or HMM squadron they're attached to. And if necessary, an ACE can even have land-based KC-130 Hercules tankers attached to it, but the tankers operate from nearby land bases. This gives the MEU its own mini-air force that can conduct assault support, offensive air support, aerial reconnaissance, command and control, anti-air warfare, and electronic warfare (the six functions of Marine Corps aviation).

Every six to seven months an MEU goes out on deployment approximately one month after another MEU returns. Prior to entering the area of responsibility, the entire MEU, and in particular the ACE, have to train together to prepare for deployment. The first step is to get all the pilots of the ACE up to speed on shipboard operations as part of the reinforced VMM/HMM squadron. Then RUT, Realistic Urban Training, is carried out at the Indiana National Guard's Muscatatuck Urban Center. From there, the MEU goes back to sea for what is called a COMPTUEX, Composite Training Exercise that irons out any kinks between the Marine Corps units and the US Navy vessels of the fleet. The final exercise before deployment is the CERTEX, Certification Exercise which is the culmination of a 6-month long work up period. Once the CERTEX has been passed, the MEU and its associated ACE can go to sea as part of an Amphibious Ready Group composed of three amphibious assault ships, with the ACE based on the big deck amphib.