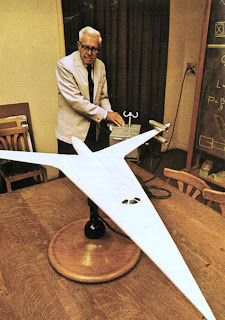 As the Second World War began to wind down, renowed British aircraft designer Barnes Wallis started investigating the challenges of supersonic flight and concluded early on that a variable geometry swing wing was the best way to accommodate the center of gravity changes in moving between the subsonic and supersonic regimes. In 1946 he wrote an engineering paper entitled "The Application of the Aerodynamic Properties to the Stabilisation and Control of Aerodynes" (quite a mouthful) in which he combined his ideas on swing wings with laminar flow studies. Starting out with small hand launched models, Barnes Wallis gradually moved up to larger versions that were launched for a catapult at 100mph. His models had slender, ovoid fuselages with swing wings mounted far to the aft and a single highly swept fin. With the end of the war, the British government was eager to regain research ground lost to the Americans and Vickers was awarded a contract of a half-million pounds to study supersonic flight. With the cancellation of the Miles M.52 supersonic research aircraft, some of Vickers' money was reallocated to Barnes Wallis' project which was given the code name Wild Goose.

The Wild Goose project ran to 1954 and it used progressively larger radio controlled models based on Barnes Wallis' designs. The later models had provisions for rocket engines in the fuselage and the RAF took notice, considering the Wild Goose design as the basis of a long range surface-to-air missile to intercept Soviet bombers before they reached UK airspace. Wild Goose ended in 1954 but the research data acquired went over to a classified project known as Green Lizard. This project called for a compact missile fired from a storable tube with flip out wings for which Barnes Wallis supersonic design work was applicable. Green Lizard was envisioned as both a surface-to-surface missile that could dispense submunitions or a surface-to-air missile powered by turbojet engines for the long range interception of Soviet bombers. It's not known exactly when the Green Lizard project was terminated, but it may have run in parallel to the Wild Goose project.

As the database on his designs grew, Barnes Wallis then moved into a manned aircraft applications of his swing-wing designs. Small aircraft builder Heston Aircraft was a subcontractor on the Wild Goose project and Wallis worked with Heston to build a small flying demonstrator designated JC.9. With a single seat, retractable tricycle undercarriage and 46 feet in length, the JC.9 was planned to fly first as a glider, then have an turbojet engine installed for powered trials. The JC.9 was then shipped in sections to the Vickers Weybridge facility for final assembly, but for reasons unknown, it remained disassembled until scrapped.

By 1954 Barnes Wallis began thinking even bigger, adapting his unique swing wing design to a supersonic intercontinental range aircraft. The RAF had issued OR.330 (Operational Requirement 330) that called for high flying supersonic bomber/reconnaissance aircraft. Although not responsible for Vickers' submission for OR.330, Wallis adapted his design to meet the stringent requirements, coming up with a sleek arrowhead shaped tailless aircraft with slender swing wings pivoted at the aft end of the fuselage. Pod-mounted engines pivoted on the tips of the swing wings and also provided some directional control. Calling his revolutionary design the Swallow, small scale models were tested in Vickers' wind tunnels with encouraging results. Scale flying models of the Swallow powered by rocket engines easily attained Mach 2.5 in flight tests. While the Swallow wasn't selected for OR.330, the RAF was sufficiently interested to continue funding Wallis' work towards a scaled-down flying demonstrator called the Research Swallow that could be readily adapted for military roles. Versions of the Research Swallow were submitted to the RAF and Royal Navy as a supersonic strike fighter.

The most impressive would have been the bomber version of the Swallow and a supersonic military transport. The Swallow bomber would have been approximately the size of the B-1 bomber with 4-5 crew, a cruising speed of Mach 2 and a range of 5,000 miles carrying a single Red Beard nuclear bomb. The military transport was even larger with a civilian airliner version that could have carried 60 passengers between the UK and Australia nonstop. Development work on the bomber and transport versions of the Swallow was estimated at 10 years, but the infamous 1957 Defence White Paper of Duncan Sandys that stated the era of manned military aircraft was being eclipsed by missiles ended funding for the Swallow.

As consolation, Barnes Wallis was allowed to meet with the American Mutual Weapons Development Program to see if the United States was interested in his extensive work. Exchange visits were conducted between Wallis' facility at Vickers and Wallis himself led several teams to the United States to meet with NASA's Langley research facility. A six month joint UK-US development program was conducted at NASA Langley to further refine Wallis' work. By June 1959, NASA's extensive testing uncovered pitch up problems in certain flight regimes as well as higher than expected drag. This effectively killed off the Swallow as an aircraft design, but NASA found the body of work still applicable to a more conventional tailed swing design. This design would eventually evolve into the world's first production swing-wing combat aircraft, the General Dynamics F-111 Aardvark.