The X-28A Osprey, the Most Unlikely X-Plane 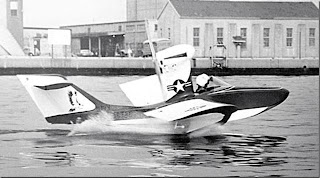 In 1969 homebuilt aircraft builder and boat designer George Pereira of Sacramento, California, started work on the Osprey I homebuilt flying boat. Using his technical background in powerboat design and construction, Pereira designed the Osprey I as a high-performance STOL sea plane intended for the growing homebuilt aircraft market. With folding wings, a single-seat open cockpit and able to be transported by a boat trailer, the Osprey I was made of wood, fiberglass, and styrofoam with a Continental C90 four-cylinder 90-hp piston engine mounted on a dorsal pylon driving a fixed-pitch two-bladed propeller. With one pilot and a full load of fuel, the aircraft weighed only 900 lbs and had a top speed of 135 mph. After finishing the design and construction, Pereira had to demonstrate that the Osprey I could safely be flown during an FAA mandatory 50-flight hour restricted flying period to be completed in less than six months.

Having duly met the FAA's requirements for a kitbuilt aircraft, Pereira was approached in 1971 by three Navy officials about seeing a demonstration of the Osprey and having one of their pilots checked out in the sole prototype. Pereira and later the Navy pilot operated the aircraft successfully over a three day period from the Sacramento River at which point the Naval Air Development Center informed Pereira that they were interested in the Osprey for Project Air Skimmer, a plan to deploy a simple single engine seaplane to Southeast Asia for air policing duties. The NADC's requirement called for not just an easy to build and fly aircraft but it also had to have a reasonable performance over existing kitplanes and be able to operate from the many rivers and lakes in South Vietnam's Mekong Delta region. Plans were for local manufacturer of the Air Skimmer aircraft by the South Vietnamese and that it be easy to train pilots to fly the aircraft in VFR conditions, operate from canals as little as 25 feet wide and be transportable by trailer with a maximum weight under 1,000 lbs.

Funded as the X-28A Osprey, the single prototype and its trailer were purchased by the US Navy on 27 July 1971 to be test flown from the Delaware River at the NADC's Philadelphia Naval Base. Since the test site sat under the Class B airspace of Philadelphia International Airport and the X-28A had only minimal instrumentation, it was restricted to 300 feet maximum altitude but it was felt that this wouldn't adversely affect the evaluation process. Flight tests took place between 16 September 1971 to 22 October 1971 and the X-28A was found to be easy to fly and easy to master by pilots of limited experience.

However, with the winding down of the Vietnam War, Project Air Skimmer quietly ended with no further plans for use in Southeast Asia. Pereira, however, refined the design with a two-seat enclosed cockpit and retractable landing gear as the Osprey II. First offered in kit form in 1974, nearly 600 have been built and flown. Not only will the X-plane be one of the smallest of the X-planes, it's the only homebuilt one, not to mention the only one that can still be built today by any homebuilt enthusiast of reasonable skill.