The Convair Model 6: A Jumbo Before Its Time 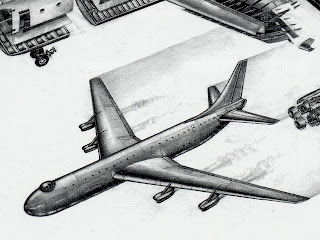 People sometimes ask me how I decide what to feature on Aviation Trivia of the Day. I'd say that the majority of the time it's something I've come across as I'm reading one of my aviation-related books. I'm one of those sub-clinical attention-deficit types who can't finish one book before starting another. I'll quite literally have quite a handful of books that I'm rotating through at any given moment. If I run across an interesting bit that I want to feature sometime in this blog, I'll make a small dog ear at the bottom corner of the page. So yeah, I have lots of books with lots of those little lower corner dog ears. But sometimes it can come from more unconventional directions.

I'm on Twitter as @SentinelChicken and the other day I was exchanging tweets with a fellow avgeek, @flyingwithfish who has a great blog here (Flying With Fish: The Blog for Those Who Fly & Those Who Want to Fly Smarter) about an entry he had on his blog regarding double-deck jets that came before the Airbus A380. His blog entry discusses the McDonnell Douglas MD-12 and I had tweeted to him about the Convair design that combined the fuselage of the production version of the XC-99 transport with the wings, jet engines and empennage of the YB-60 which was designated the Convair Model 6. He's going to be doing a write up in his blog on my artwork, so it wanted to return the favor the best I could be crediting him with giving me the idea for today's entry.

But before I can talk about the Convair Model 6, I have to jump back a bit and talk about both the XC-99 and the YB-60 as they're both derivatives of the B-36 Peacemaker. Convair's work on the B-36 began in the midst of the Second World War as there was a concern that Great Britain would fall to the Reich and we would need strategic bombers that could reach Europe from the United States. But in parallel to the development of the B-36 there were design efforts that looked at passenger versions of the B-36. As early as May 1942 Convair had been looking at a transport version of the B-36 called the Model 37 that combined the wing, six pusher piston engines and empennage of the B-36 to a new fuselage unit. In December 1942 the USAAF signed a contract with Convair to build a single example of what was designated the XC-99 on the stipulation that the XC-99 would not divert resources from the B-36 project. Convair saw the XC-99 as a way to validate some of the design concepts of the B-36 quickly as it would not need military equipment (what's called government-furnished equipment) for the transport role.

Despite the ongoing war, Convair pitched the XC-99 as a passenger transport to the airlines, even succeeding in getting 15 orders from Pan American World Airways for what the airline was calling the "Super Clipper". Production was to begin at the end of the war and the Convair Super Clipper would have carried 204 passengers in luxury across the Atlantic.

As the B-36 was built in Fort Worth, the XC-99 would have to be built at Convair's San Diego Lindbergh Field facility. The wings and empennage were shipped to San Diego from Fort Worth and on 23 November 1947 the XC-99 made its first flight. The XB-36, by comparison, made its first flight in Fort Worth on 8 August 1945. By January 1949 the XC-99 was retrofitted with four-wheel main bogies that allowed it to use any airfield in the United States and abroad that could accommodate the production B-36. The following year it got fitted with production standard Pratt & Whitney R-4360 radial engines that were more powerful than the earlier version installed.

In its 1950 incarnation, the XC-99 could carry over 100,000 lbs of cargo or 400 fully-equipped troops, or 300 litter patients on a double deck layout. Based at Kelly AFB and operated by the San Antonio Air Materiel Depot, the XC-99 flew on operational transport missions in the United States for several years before being retired. A production version of the XC-99 proposed by Convair would have moved the flight deck to a B-36 "bubble" atop the fuselage with the nose gear installed in a bulge under the nose (similar to what you see on the Lockheed C-5 Galaxy). Moving the flight deck upward to the top deck allowed straight through loading via aft clamshell doors and a ramp and nose doors and a ramp, a feature that the USAF didn't have at the time in its transport aircraft. This production version would have had a range of 3,800 miles with a full payload. The USAF, however, decided on the Boeing C-97/KC-97 Stratofreighter and the Douglas C-124 Globemaster II for its long distance heavy airlift needs, both aircraft that paled in performance of the proposed production version of the XC-99.

Now the YB-60 is often seen as the competitor to the Boeing B-52 Stratofortress on account of having the same eight engines in the same four paired nacelles, but the USAF never conducted a true competition for the role filled by the Boeing B-52, though Douglas and Convair did work on designs to fill that role even though Boeing was set to build the replacement for the Convair B-36. In August 1950, Convair submitted an unsolicited proposal for a jet-powered, swept-wing version of the B-36 Peacemaker. As Convair intended to use many B-36 components, the USAF was sufficiently interested to order two YB-60s (the original designation being B-36G). Using many of the structural components of the B-36F, construction of the first YB-60 began in Fort Worth in the spring of 1951 and it made its first flight on 18 April 1952, only three days after the first flight of the Boeing YB-52 Stratofortress.

Although there was no formal competition between the YB-60 and the YB-52, it was quite obvious that by using B-36 components, the YB-60 was significantly cheaper than the Stratofortress. But as the Stratofortress was designed from the outset as high-speed jet intercontinental jet bomber, its performance blew the YB-60 away. The YB-52 was 100mph faster (the thick B-36-based wing of the YB-60 was one of its biggest liabilities) and it had more refined aerodynamics as the YB-60 flight test program turned up multiple stability and control deficiencies. As a result, after only 66 flight hours the USAF canceled the YB-60 program with the second YB-60 being 95% complete.

So here's where the XC-99 and the YB-60 meet. Given the parallel design efforts taking place with several key personnel in common, it was inevitable that Convair would propose an all-jet version of the C-99 production version transport. First proposed in 1950, the jet-powered C-99 combined the swept-wings and eight jet engines in paired nacelles and swept empennage of the YB-60 with the production version fuselage of the C-99. It would have been an impressive transport with both nose and aft loading cargo doors, a double deck with the upper deck being pressurized and it jet form. And this was in the early 1950s- the USAF didn't have intercontinental jet cargo capability until the first flight of the Lockheed C-141A in December 1963 and while the Starlifter would have been faster than the Convair Model 6 jet transport, it didn't have the immense load capacity, being only able to carry about 70,000 lbs compared to 100,000 lbs of the Convair Model 6. And it wouldn't be until the first flight of the Lockheed C-5A Galaxy in June 1968 that the USAF had a double deck jet transport with straight through loading via the nose and tail! The Galaxy showed the march of technological progress by being able to carry over two and a half times the payload of the Convair Model 6 at higher speeds and farther distances.

But considering the technology of the day, the Convair Model 6 wasn't out of reach as it used components from both the XC-99 and the YB-60 that were already flight proven.