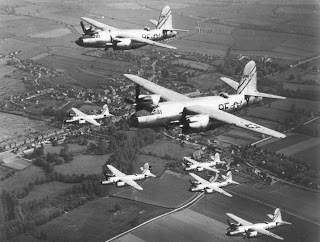 The Martin B-26 Marauder medium bomber was built in two locations in the United States during the Second World War- at the main Martin plant at Middle River outside of Baltimore, Maryland, built 3,681 B-26s and the Omaha, Nebraska, plant, built 1,585 Marauders. Designed by Peyton Magruder, who at the time he was placed in charge of the B-26 program by Glenn Martin he was only 26, the B-26 Marauder started once it won the Army competition for a medium bomber in July 1939. The prototype rolled out at the Middle River plant on 25 November 1940 and made its first flight that day. The first production Marauders were already flowing to USAAF combat units in February 1941.

Marauders were blighted early on by numerous crashes caused by pilot inexperience but would go on to fly over 110,000 missions in the Second World War with a combat loss rate of only 0.5%, the lowest of any Allied bomber of the war.

But there were a lot more things that made the B-26 Marauder a milestone in aviation history that aren't as well known to the annals of history:

-It was the first Allied bomber type in Europe to complete 100 missions, a B-26 named "Mild and Bitter" with a mission against the Luftwaffe airfield at Evreaux, France on 9 May 1944.

-It was also the first Allied bomber type to complete 200 missions, a famous B-26 named "Flak Bait" that completed its 202nd mission in May 1945 before the German surrender.

-It was the first US Army Air Forces bomber to use aerial torpedoes during the war- a two-thousand pound naval torpedo could be slung under the fuselage from an external rack (most torpedo missions were flown in the Pacific).

-It was the first twin engine medium bomber to be able to carry a greater bomb payload than the Boeing B-17 Flying Fortress, the heavyweight of the day.

-It was the first US Army Air Forces aircraft to use external gun pods- two self-contained 50-caliber machine guns were mounted two to each side of the forward fuselage for ground strafing.

-It was the first bomber to have an all-plexiglass nose which happened to be a Martin innovation in shaping plexiglass into the necessary aerodynamic curves.

-It was the first combat aircraft to use butt seams for the skin rather than overlapping seams. This improved the aerodynamics of the bomber by reducing drag.

-It was the fist bomber to use an all-electric bomb release mechanism.

-It was the first US combat aircraft with self-sealing fuel tanks, another Martin innovation which was called "Mareng Cells"- short for Martin Engineering.

-It was the first bomber to use flexible tracks to bring ammunition from its storage boxes in the mid-fuselage bomb bay to the tail gunner's position. And the maker of those flexible tracks? Lionel. Of Lionel trains fame.

-It was the first combat aircraft to substitute plastic for metal in over 400 components for weight savings.

Source: Raise Heaven and Earth: The Story of Martin Marietta People and Their Pioneering Achievements