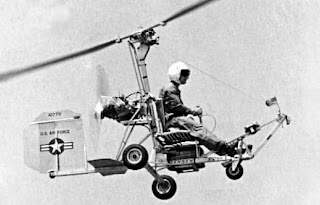 As the Vietnam War escalated in the 1960s and air crew losses began to mount to increasingly sophisticated air defenses, thoughts began to circulate in the USAF if there was a way to provide downed air crew with a better means of descent than just the winds and parachute. What if downed aircrew could have a better choice in where to land? And better yet, what if they could fly away to friendly territory? The USAF began to discuss with aircraft manufacturers and designers if there wasn't a way to package an ultralight aircraft or glider into part of the ejection seat and cockpit that would give shot-down air crew more options on bail out. Proposals were issued to the industry in 1967 and Bensen Aircraft Corporation, a well-known builder of homebuilt autogyro aircraft, submitted an unpowered version of one of their autogyros to be used as an autogyro glider. Bensen's proposals easily won the USAF over and contracts were issued in 1968 and the program received the X-plane designation of X-25A (a powered version) and X-25B (unpowered glider version). A third version called the DDV (Discretionary Descent Vehicle) was an even lighter and simpler version of the X-25B designed for one time use with automatic blade deployment to become a rotor chute even from a supersonic ejection.

The USAF took delivery of the X-25A and X-25B on 16 February 1968 and immediately embarked on a series of flights to determine the length of a pilot training cycle necessary to master the autogyro controls. The X-25A was used to power itself to an assigned altitude and then shut down its engine and autorotate. This was to determine the glide performance of the aircraft. Twenty pilots all with fixed wing experience and no rotary wing time were then checked out in the X-25B to see how easy it was to operate. All 20 pilots were able to master the X-25B within 30 minutes. The DDV was then used with anthropomorphic test dummies to measure G-loads and glide performance with an incapacitated pilot.

The winding down of the Vietnam War ended interest in the autogyro solution and it was felt that such an aircraft could be packaged to be accommodated in most combat aircraft cockpits with the current technology of the day. The X-25A is currently on display at the National Museum of the US Air Force in Dayton, Ohio, while the X-25B is at the Museum of Aviation at Warner Robbins, Georgia. The final disposition of the DDV is unknown but the X-25 will always be known as the smallest of the X-planes if not one of the most obscure.