The Story of Los Angeles Airways 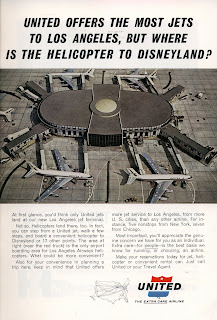 On 1 October 1947 Los Angeles Airways inaugurated the world's first scheduled helicopter air mail services on a loop route through the San Fernando Valley followed by additional routes to Newport Beach and San Bernadino within its first six months of operation. LAA was founded on 11 May 1944 by Clarence M. Belinn, the former head engineering superintendent of National Air Lines who was known at the time for having designed the fuel tank crossfeed system used on Amelia Earhart's Lockheed Electra. Though having established LAA during the Second World War, it wasn't until 1947 that the US Civil Aeronautics Board awarded LAA the route authorities to operate local air mail services in Southern California using the Sikorsky S-51. Before long, LAA was operating a twice-a-day mail service between the main downtown post office and Los Angeles International Airport along with a small package air express service.

With a fleet of five S-51s, LAA's first year of operations resulted in 700 tons of mail being carried with approximately 40,000 landings throughout the Los Angeles metropolitan area. The small operation maintained a 95% reliability rate and by the time it began its small package air express service in 1953, it was annually moving nearly 4,000 tons of mail a year.

In the summer of 1955 LAA added the new Disneyland resort and amusement park to its route network, using a dedicated Disney heliport in Anaheim. In that summer LAA had five passenger Sikorsky S-55s flying scheduled services between 25 destinations in the Los Angeles Basin from Hollywood in the north, Long Beach and Orange County in the south, and San Bernadino in the west. LAA even had interline agreements with major airlines at LAX, offering passengers connecting services on United Air Lines and later on, American Airlines. On 1 March 1962 Los Angeles Airways became the world's first scheduled operator of the turbine-powered Sikorsky S-61L with a 28-passenger capacity, having originally ordered four of the large helicopters derived from the Sikorsky Sea King for $650,00o each.

Despite having earned a permanent certificate from the Civil Aeronautics Board in July 1965, the CAB decided to end its subsidies of approximately $4.3 million/year to LAA having ruled that scheduled helicopter passenger services were not commercially viable. Though the loss of the federal subsidy was a significant blow to LAA, it was offset by investment by American and United for 23.8% control of LAA that allowed the airline to continue operations.

Tragedy struck LAA for the first time on 22 May 1968 when a main rotor blade separation from one of LAA's S-61Ls operating as Flight 841 caused a crash at Paramount City with the loss of all onboard. Then again, this time on 14 August 1968 another S-61L operating as Flight 417 was lost again due to a main rotor blade separation at Compton with the loss of all onboard including the 13-year old grandson of the founder of LAA, Clarence M. Belinn. The losses resulted in the grounding of the profitable Sikorsky S-61Ls and the temporary cessation of passenger services to Disneyland. With two helicopters lost, LAA had lost 1/3 of its S-61L fleet at that time in just the space of several months and the disruption even without the grounding would have been tremendous to LAA's services.

As a temporary stopgap, LAA ordered four De Havilland Canada DHC-6 Twin Otters in late 1968 and leased two further Twin Otters for use on routes to Riverside and San Bernadino from LAX Airport. The leased Twin Otters came from a small commuter airline based in Long Beach, Aero Commuter. In the following year, Aero Commuter rebranded itself as Golden West and took at 54% controlling interest in Los Angeles Airways. A year later, a pilots' strike lasting six months hit LAA further crippled its finances and a rescue deal was arranged with the Hughes Tool Company (Hughes Toolco) with Howard Hughes himself providing bridging financing pending the final deal. However, Hughes would pull the plug on the deal before it would be signed. As a result, on 26 September 1970, Los Angeles Airways ceased operations.

On July 1971 Golden West acquired LAA's operating certificate and two Sikorsky S-61Ls to restart helicopter services between Disneyland and LAX. The first services were flown by Golden West on 15 March 1972 but only lasted six months due to Golden West's own financial problems. The only reminder of LAA's historical legacy in Southern California is a memorial plaque near Gate 74 at Terminal 7 (United's terminal) of LAX where in its heyday, LAA's helicopters connected passengers from all over the metropolitan area with United's flights.