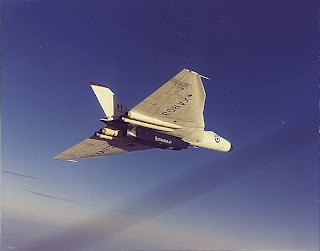 Although progressively improved and more powerful versions of the Bristol Olympus jet engine powered the Avro Vulcan bomber, there were also other versions of the Olympus destined for other aircraft that made their initial flights on specially-converted Vulcan testbed aircraft. In addition, other similarly-equipped Vulcans served to flight test other engines during their development cycles as well.

The first engine to be flight tested on the Vulcan wasn't an Olympus variant, though. That honor goes to the Rolls-Royce Conway low-bypass turbofan. The first prototype Vulcan, tail number VX770, was retrofitted with four Conway engines in 1956 and delivered to Rolls-Royce for the start of the Conway flight test program in August 1957. Unfortunately, VX770 was lost during a Battle of Britain flying display at RAF Syterston in September 1958 when the maneuvers it was performing overstressed the airframe, resulting in the loss of the crew. A second Vulcan bomber, XA902, was then selected to undergo conversion with the Conway engines to replace VX770. The conversion work began at Avro's facilities in December 1958 and was completed in July 1959. The Conway engines used were the Conway 11 engines (RAF designation Conway Mk.102 and 103) which were destined for use on the Handley Page Victor B.2, an upgraded version of the original Victor B.1 model.

The Conway test program called for the engines to be run at cruise power at 40,000 feet- however, at that power setting, the Conway 11s were more powerful than the Olympus engines of the Vulcan and the testbed would have easily exceeded the Vulcan's maximum speed and overstressed the airframe! As a result, the Conway 11 engines had to be operated at lower thrust settings similar to what was used on BOAC's Boeing 707-430 jetliners. It was found that two Conways could be operated at cruise settings as long as the other two engines were run at lower settings. Given that the prototype Vulcan VX770 that was lost wasn't as structurally strong as XA902, it became possible to complete the Conway flight test program.

With the Conway test program complete in 1961, XA902 was then converted to take Rolls-Royce Spey engines on the inboard positions while retaining the Conway 11 engines on the outboard positions. It made its first flight in this configuration in October 1961 to support the Spey development for its use on De Havilland DH.121 Trident, the BAC One-Eleven, the Blackburn Buccaneer S.2 and the Hawker Siddley Nimrod. XA902 would be retired from service in 1963.

In 1962, another early-mark Vulcan B.1 was taken from service to test the Olympus 22R engine that was destined for the BAC TSR.2. Vulcan XA894 was modified with a large ventral nacelle with bifurcated intake on each side of the nose landing gear. Conversion work on XA894 began at Filton in 1960 and it made its first flight with the much more powerful Olympus 22R in February 1962 in support of the TSR.2 development program. In December of that year during a ground run test, an uncontained turbine blade failure resulted in a fire that destroyed XA894. No replacement was needed, though, as the Olympus 22R had completed enough of the needed test points for the TSR.2 program.

In 1964, another Vulcan was pulled from service to serve as an engine testbed, this time it was tail number XA903 which arrived at Filton in January of that year for conversion work to flight test the Olympus 593 in support of the development of the BAC/Aerospatiale Concorde. Using a similar ventral nacelle as had been used on XA894 in the Olympus 22R flight test program, this time instead of a bifurcated intake a straight-through intake was used that resembled a single-engine Concorde engine nacelle. A retractable spray bar was also fitted ahead of the intake and water from a bomb bay water tank was used to test water ingestion and icing conditions on the Olympus 593 engine. The first flight was made with the Concorde engine in September 1966 and the test program finally ended in 1971 with over 400 hours of flight time. With the Olympus 593 at full power, the Vulcan testbed could still fly and maneuver with its own four engines at idle!

Testbed work would continue for XA903, though. In August of 1971 XA903 was flown to Marshalls of Cambridge for conversion work to support the development of the Rolls-Royce/Turbo Union RB.199 engine for the Panavia Tornado program. The ventral nacelle used for the Olympus 593 program was modified by Marshalls to not only accommodate the RB.199 engine, but to replicate the starboard side of the Tornado's fuselage. The first flight with the RB.199 was made in April 1973 and one of the most unusual aspects of the RB.199 flight test program was that the ventral nacelle was even equipped with a Mauser 27mm cannon that would be used on the Tornado. The cannon's location in relation to the intake replicated its location on the Tornado so that gun gas ingestion trials could be carried out. The firing trials were carried out at Boscombe Down but weren't done while airborne- XA903 remained on the ground and firing butts were used while Rolls-Royce and Turbo Union engineers analyzed the engine's performance as gun gas was drawn into the intake. A total of 285 flight hours were accumulated with the RB.199 on XA903 when the Vulcan was finally retired in February 1979, the last early-mark Vulcan B.1 to have flown.