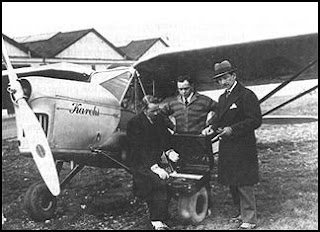 De Havilland Canada had only been in operation for three years after having been established in Toronto in 1928 when the Australian aviation pioneer Bert Hinkler showed up at DHC's downtown offices unexpectedly. Not immediately recognized, Hinkler was already known in aviation circles as having conducted the first solo flight between the UK and Australia in a single engined Avro Avian biplane in only 15 days. Having served in the Royal Air Force in the First World War and worked as a test pilot for A.V. Roe (Avro), he was already known as an inventor and self-taught engineer having created several aircraft navigation instruments as well as a shell ejector for the back seat gunners of First World War observation aircraft. After having flown Britain's Schneider Cup racers he embarked on a series of increasingly long range flights that demonstrated his navigational skills.

When Hinkler showed up at DHC's offices in February 1931, he had just been on a several month tour in the United States visiting aircraft manufacturers looking for a suitable light aircraft that he could modify for a long distance flight he had secretly been planning. Not having found the ideal aircraft, he had come to Canada to examine the De Havilland Canada's DH.80A Puss Moth which was known for its high performance of the day with a top speed of 124 mph. A high wing monoplane derived from the successful Gypsy Moth biplane that DHC was already license-building for the North American market, terms were quickly agreed to and Hinkler purchased Puss Moth number 2049 with the Canadian registration CF-APK on 29 April 1931. As the aircraft was already completed, Hinkler wished to do his own modifications to the aircraft and DHC readily gave him access of their factory spaces at Downsview. Nearly every day, Hinkler would be in his overalls, tinkering and modifying his aircraft. Factory workers noted him to be a very polite and quiet individual who kept to himself most of the time other than the DHC engineers that offered him assistance with the various modifications he was carrying out on the Puss Moth. Much of his work centered around saving as much weight as possible, even to the extent of removing the navigation lights. The interior appointments were removed save the pilot's seat and replaced with a custom-made long-range fuel tank which was delivered from a firm in New York he had contracted with to build it to his specifications. Imported bracing wires which were streamlined in cross section were also delivered to replace the Puss Moth's original set.

Hinkler enlisted the help of two veteran engineers to figure out a way of replenishing the engine oil in flight but he wanted the system to be as easy to use as possible and to only replenish what was exactly needed. Discussing his dilemma by the water cooler, the DHC engineers pointed to the water cooler and decided that a similar system could be used in which in inverted can of oil fit into an adapter that fed oil the engine. So he wouldn't have to carry numerous empty cans in the cabin on his flight (he still hadn't revealed his plans), the engineers gave him a pair of tin snips to use to cut up the cans into pieces and throw them out the window.

He would take his aircraft out for a few test flights after each modification he performed. While most pilots who came to DHC's factory to visit often spent their weekends in the Toronto social scene, Hinkler would spend every weekend possible in New York. It later turned out he had courted and married a woman there, all while still being married to his first wife in England!

On 20 October 1931 he took off from DHC's Downsview airfield for the last time with no advance notice and landed in New York City to prepare for his record flight. Again, with no publicity and much secrecy, Hinkler departed New York the afternoon of 26 October. He planned his flight to take place in darkness and since he had removed the navigation lights from his Puss Moth, he wasn't allowed to fly at night over the United States. So he flew a long straight line flight over the Atlantic and Caribbean at night arriving in Kingston, Jamaica the next morning after 18 hours in the air. By Thanksgiving he had reached Natal, Brazil and prepared to cross the stormy South Atlantic. To keep the press at bay who had caught wind of his record flight, he filed a false flight plan to Dakar, Senegal, in West Africa and instead waited 48 hours before setting off and landing in British Gambia. From there he continued on to Casablanca, Morocco, then Paris, France, and finally landing in London, England where a hero's welcome awaited him, making Bert Hinkler the first person to cross the South Atlantic solo and only the second person to cross the Atlantic solo after Charles Lindbergh.

In 1933 he set out to break the existing UK-Australia flying time record which at the time stood at 8 days, 20 hours. He disappeared over the Alps and sevearal months passed before the wreckage of his plane and his body were discovered. The dictator Benito Mussolini ordered Hinkler buried with full military honors in Florence.

As an interesting aside I found this little tidbit:

A small piece of wood, a relic from one Hinkler's hand-made gliders, was presented to the U.S. astronaut Don Lind in early 1986 as a token of appreciation for his coming to Bundaberg to contribute to the Hinkler Memorial Lectures. Lind in turn gave it to Dick Scobee, the captain of the ill-fated final Challenger mission. Scobee took the wood with him on board the Challenger, inside a small plastic bag that he placed in his locker. After the explosion, the bag and the wood were recovered from the sea, identified, mounted, and later returned to the Hinkler Memorial Museum.