The Most Ambitious UAV Ever: Quartz/AARS 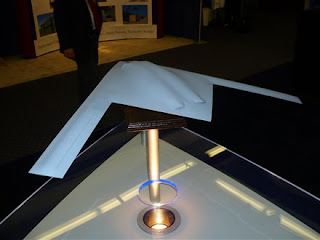 One of the most ambitious if not the most expensive UAV design effort came in the 1980s as the Cold War was coming to its climax. Over $1 billion was spent on a black project called the AARS- Advanced Airborne Reconnaissance System or known by its code name, Quartz. The Quartz UAV was designed to be a very stealthy, long-endurance UAV that would penetrate Soviet air space in a time of war and identify what were called "strategic relocatable targets"- the rail- and road-mobile ICBMs of the Soviet's Strategic Rocket Forces. Quartz was sponsored by the US Air Force and the NRO, National Reconnaissance Office.

The requirement for a 24-hour endurance and low-observability tested the limits of aerospace technology of the day. In 1983 Lockheed and Boeing were selected to develop concepts for the Quartz program. Lockheed's initial design was a giant aircraft with a 267-foot wingspan propelled by two turboshaft engines driving massive 47-foot propellers. The engines were actually dual-cycle turboshaft/turbojet engines, with the engines operating as jets and the two-bladed props locked in horizontal for takeoff and landing. Once at cruise altitude, the engines shifted into turboshaft mode to drive the large props.

Little is known of Boeing's design for Quartz other than it may have been a flying wing design along the same lines as the Lockheed proposals. The need for low-observability and autonomous operation in denied airspace resulted in an expensive design that was compounded by the fact that only a few Quartz UAVs would be needed- the technology used was so sensitive that only the strategic imperative made it worth the risk of losing the aircraft in the event of malfunction or shootdown.

As the costs of the program soared, it became a victim of an inter-agency squabble between the CIA and the NRO who wanted Quartz and the USAF, who was losing interest due to the rising costs. In 1990 Lockheed and Boeing were directed to combine their efforts which resulted in a jet-powered flying wing not too dissimilar from the Northrop B-2 Spirit stealth bomber. As the costs still continued to climb, the USAF continued to back away from the program and even a redesign for a slightly smaller version failed to bring the USAF back aboard. Quartz was cancelled in 1992 when the NRO finally withdrew from the program as well.

In the 1990s, there were three "tiers" of UAV development based on operational capability. "Tier I" was for a low-altitude system that became the Gnat-750 UAV. "Tier II" was for a more capable medium altitude system based on the Tier I craft and that became the current Predator UAV family. The specification for "Tier III" would have been filled by the Quartz project, but with its cancellation, Tier III was split into two- Tier II+ was for the Quartz's performance without stealth and this became the RQ-4 Global Hawk UAV. Tier III- ("Tier III Minus") was stealthy but without the performance and payload of Tier II+. This design became the RQ-3 DarkStar. DarkStar, a joint effort between Boeing and Lockheed, had little in common with Quartz and itself would be canceled in 1999 in favor of further development of the Global Hawk.

However, it's believed that the current Lockheed/Boeing proposals for a next-generation bomber (the picture included in this blog post) are nearly identical save the cockpit to the resultant Quartz design.