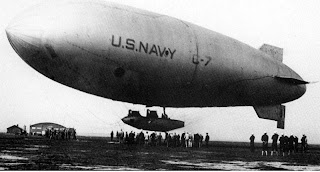 Following the end of the First World War, Britain and France were determined to put the German aeronautical industry out of business for good with harsh terms being imposed by the Treaty of Versailles. One of the terms involved getting Germany's prized advanced Zeppelin fleet divided between Britain and France. The United States, having operated several LTA (lighter-than-air) patrol stations in France during the war where blimps were used to protect the Atlantic convoys, wasn't a party to the deal but rather than taking on Zeppelins (which the Germans ended up scuttling, infuriating the British and French), Navy personnel were sent throughout Europe to act as "observers" to the Armistice Commission that was essentially dissolving the German aviation industry. One of those Navy personnel, Commander Jerome Hunsaker, who after World War II would become chairman of NACA, NASA's predecessor, made several trips to Europe to study German Zeppelin technology between 1918 and 1920.

By 1919 Commander Hunsaker's influence on what he was learning in Europe convinced the then-Acting Secretary of the Navy, Franklin Delano Roosevelt, to approve preliminary construction of dirigibles to gain experience in LTA operations. The first designs were, like their British and German counterparts, designed for the use of hydrogen gas. But by the end of 1919 FDR on behalf of the Navy established the naval air station at Lakehurst, New Jersey by purchasing 1,700 acres from land that the Army thought was of little use.

During the testing of helium extraction, production and transport methods, the first helium gas arrived at Hampton Roads, Virginia, for testing in a Navy C-class blimp, the C-7. Ten C-class blimps were built in 1918 with production split between Goodyear and B.F. Goodrich and the control cars built by Curtiss Aircraft. It took several months to accumulate enough helium from Fort Worth and on 2 December 1921, the C-7 lifted off with 180,000 cubic feet of helium, making the world's first flight of a helium-filled airship. Fifteen sorties were made to determine the flight characteristics as well as handling methods for a helium-filled airship.

In 1921 the US Navy took the lead in aeronautical development by establishing the Bureau of Aeronautics (BuAer) with the airship-minded Captain William A. Moffett (later Rear Admiral) as its firs chief. One of Moffett's first acts as the head of BuAer was to rationalize airship development, placing Commander Hunsaker in charge. By the following year, the first American dirigible was ready for its first flight. The USS Shenandoah, designated ZR-1 and based on the LZ-49 Zeppelin design would be lifted by helium and the success of the Shenandoah led to the Navy pushing for control of the US helium supply as a strategic asset.

Early flight operations with the USS Shenandoah validated Hunsaker's belief that helium, something that was plentiful in the United States, would be a more suitable lifting gas as it was inert. Helium is often found in some natural gas deposits. Two of Hunsaker's assistants spent most of 1921 working with Linde Air Products Laboratory (then a division of Union Carbide) learning techniques and methods for the extraction, isolation and purification of helium. In 1925 the Bureau of Mines was assigned control of helium extraction and production, taking control of the only helium production plant in the United States at the time in Fort Worth, Texas. Funding would come from both the Army and the Navy defense budgets as helium was already considered a strategic asset.
at 19:29