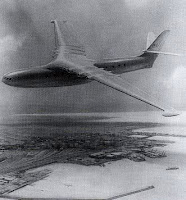 When the Saunders-Roe Princess flying boat made its maiden flight in August 1952, the engineers who designed it were well aware of the rise of the pure jet and had already been at work on a pure jet-powered successor to the Princess, the Saunders-Roe Duchess. With a cruising speed of 500mph and accommodating 74 passengers, the Duchess was to be powered by six De Havilland Ghost engines buried in the wing roots.

The Duchess would have had a wingspan of 124 feet and a gross takeoff weight of 130,000 pounds. The slight anhedral of the wings allowed for wingtip floats installed in a similar manner to the Martin P6M Seamaster. The 74 passengers were carried in forward and aft cabins with four-abreast seating and a cargo compartment in the center fuselage where the jet noise would have been the loudest in the cabin. Having the cargo compartment at the center of gravity also eased some design issues in the Duchess. The anticipated range of the Duchess would have been between 1,300 and 1,500 miles, modest when compared with what Boeing and Douglas were offering on their soon-to-arrive designs.


Unfortunately for Saunders-Roe, the impending arrival of the high-performance land-based jetliners from Boeing and Douglas would eclipse the Duchess with higher speeds and greater passenger and cargo capacity. Tasman Empire Airways had expressed significant interest in the Duchess, though, as a passenger jet seaplane would have been ideal on its routes amongst the smaller islands between Australia and New Zeland. However, interest from a single operator wasn't enough to bring the Duchess into production. It would not be until 1998 that a passenger-carrying jet seaplane would take to the air with the Beriev Be-200.
Source: An Illustrated History of Seaplanes and Flying Boats by Maurice Allward. Barnes and Noble Books, 1993, p129.
at 18:41