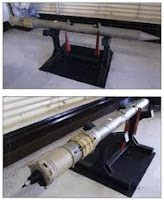 The Igloo White air-dropped acoustic sensors used in the Ho Chi Minh Trail during the Vietnam War to detect truck traffic weren't the last word in remote sensing technology for airborne interdiction. During Operation Iraqi Freedom, Steel Eagle was developed at the weapons research laboratories at Eglin AFB, Florida. Once a classified program, Steel Eagle came to light during the conflict as a possible asset in detecting and destroying mobile Scud missile launchers used by the Iraqis. Like Igloo White from the Vietnam War, Steel Eagle was a slim aircraft-dropped pod that contained acoustic and seismic sensors that activated once the pod was embedded in the ground near possible travel routes.

According to aviation author Steve Davies in his book on F-15E Strike Eagle units in combat (see source below), only about 35 of the Steel Eagle pods were made and were flight tested from an F-15E at the Nellis AFB ranges during OIF. The problem with the project is that there was no ballistics information on the pod provided for the weapons delivery system of the F-15E which made it difficult to accurately place. However, testing is said to have validated the basics of the system but no Steel Eagle pods were dropped during Operation Iraqi Freedom.

Technology that was validated in Steel Eagle is now part of the military's ARGUS project- Advanced Remote Ground Unattended System.