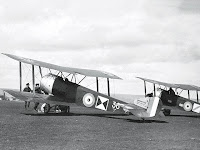 aircraft of the First World War were often fragile contraptions not ideally suited to the rigors of sustained aerial maneuvering. In Britain, Herbert Smith of the Sopwith Aviation Company designed a new biplane based on an earlier design, the Sigrist Bus (named for the manager of the Sopwith factory, Fred Sigrist), that never went into production. In most contemporary biplane designs, the two upper wings were joined by a central section. Support struts attached to the upper longerons of the fuselage to the ends of the central section and usually a second set of struts were attached to the inner part of the outer wings connected to an outer set of longerons on the fuselage.

In the new two-seat Sopwith design, there was no central section and the two upper wings were joined together. A W-shaped set of struts supported the upper wing of the biplane to the fuselage longerons and were considered "one and a half set of struts" instead of two sets of struts, which led to the new Sopwith's name, the 1 1/2 Strutter. The one and a half strut layout gave the upper wing tremendous rigidity like a railroad trestle.

But more remarkably in the Sopwith 1 1/2 Strutter, it introduced two features that are now commonplace on modern aircraft.

The first innovation was a variable-incidence horizontal stabilizer. The front spar of the tailplane was hinged on the rear fuselage and a worm gear actuated by a set of cables linked to a handwheel in the cockpit allowed the pilot to adjust the trim of the entire stabilizer. At a neutral setting, the tailplane was angled +2 degrees and the worm gear allowed the pilot to move the entire assembly more or less from that neutral setting depending upon the flying conditions.

The other innovation on the 1 1/2 Strutter were airbrakes on the trailing edge root of the lower wing. Pivoted at about quarter chord on each side, the airbrakes were operated by another handwheel in the cockpit that linked to a set of cables that raised the airbrakes up to 90 degrees upward and could be locked into position by the pilot. As the 1 1/2 Strutter had relatively clean lines for the day, it had a flat gliding angle and high landing speed (most aircraft of the day didn't have flaps) and the airbrakes were used to assist with the descent and landing.