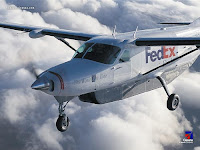 It was in the late 1970s that analysts at Cessna realized that the vast majority of utility aircraft used in remote areas were either unsuitable for the role or were, in the case of the Douglas DC-3 and the De Havilland Beaver/Otter series, aging with no ideal replacement in the works. So on 20 November 1981 the Cessna Model 208 Caravan was launched, John Berwick, the chief engineer at Cessna's Pawnee Division in Wichita, Kansas, brought on board two men who were instrumental in design and development of the De Havilland Canada Beaver- the first individual was Russ Bannock, who first flew the Beaver on its maiden flight in August 1947 and later rose to De Havilland Canada's sales director after having demonstrated the Beaver worldwide.

The other addition was Dick Hiscocks who was the head aerodynamicist on the Beaver and later became De Havilland Canada's VP for engineering. Both Bannock and Hiscocks had recently retired from DHC and were brought in regularly to advise Cessna and review the program on a monthly basis. Two years after launch, the Caravan made its first flight on 9 December 1982.

At about the same time, Federal Express was looking at a small cargo aircraft as a feeder to replace trucks that were used to fly packages to/from small towns to larger feeder cities that transferred them to the larger jets in the cargo fleet. The founder and president, Fred Smith, initially wanted only twin-engined aircraft for the feeder role but was convinced by Cessna to a flying demonstration- Smith was sold and in 1985 ordered 30 Caravans featuring an underfuselage cargo pannier developed for Federal Express (but now offered to all Caravan customers). In their first six months of operation with the company, the Caravans had a 99 percent dispatch rate in over 2,000 hours flying time. FedEx also drove the development of a stretched Caravan, the Grand Caravan Model 208B which had four additional feet of fuselage for more cargo capacity. The first 208B went into service for the company in October 1986 and by 1996, the Caravan fleet had flown over 1 million hours for the company, by which point they had 300 Caravans in service. The 500th Caravan built would go to FedEx.