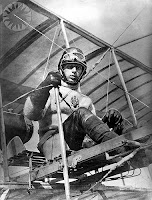 On his very first combat mission in 1915 flying a two-seat FBA flying boat to attack German gunboats, the young Alexander de Seversky would lose his right leg. After recuperation, he was assigned as the chief naval aircraft inspector for the Russian Imperial Navy's Petrograd district which gave him an appreciation for the design and production of aircraft. He worked closely with Dimitry Grigorivich on a series of flying boats that resulted in the M-9, the first Russian-designed naval aircraft to go into production during the First World War. Seversky encouraged Grigorivich to incorporate a machine gun mount as well as armor plating for the crew on the M-9.

Despite losing his flying status due to his injury, Seversky managed to perform an aerobatic display in the M-9 that enraged his superiors but won him the admiration of Czar Nicholas II, who ordered Seversky placed back on flying duty. Fitted with a wooden prosthesis and flying the plodding M-9 flying boat (it only had a maximum speed of 69 mph), he managed to score four kills against German aircraft. In 1917 he started flying a Nieuport 21 biplane and scored his fifth and sixth kills by single-handedly downing a German bomber and its fighter escort, bringing him to ace status.

In 1918 his status won him assignment to Washington D.C. as the Russian military attache with the embassy, but the Bolshevik Revolution that year resulted in him staying in the United States for good. He served as an assistant to Brigadier General Billy Mitchell in Mitchell's crusade to advance the cause for air power and Seversky would eventually establish his own aircraft manufacturing firm, Seversky Aviation, in Long Island, New York. In 1939 amidst a corporate reorganization Seversky was voted off the board by his own company which was renamed Republic Aviation. Another Russian emigre who worked for Seversky, Alexander Kartvelli, would take one of Seversky's designs, the P-35A fighter, and develop it further along a series of subsequent designs that culminated in the Republic P-47 Thunderbolt.

When he died in 1974, Seversky would hold 100 aviation-related patents and had received the Exceptional Service Medal for his advisory work for the U.S. Air Force in the 1960s.