When Israeli Aircraft Industries created the Kfir fighter-bomber by replacing the SNECMA Atar turbojet with a more powerful GE J79 engine, the additional modifications required to accommodate the American engine (which was shorter but heavier) along with the avionics needed for the strike role and the heavier undercarriage to increased takeoff weights with heavy bombloads degraded the performance and maneuverability of the the first generation Kfirs. Rather than try increasing the thrust of 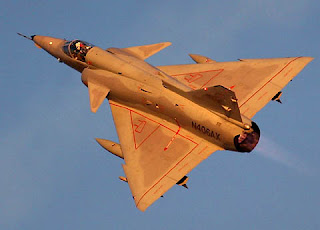 the J79 engine, IAI engineers decided the solution would have to be an aerodynamic one.

The addition of canards was favored early on and Dassault cautioned IAI about adding canards to the aircraft based on the French experience with the Mirage Milan canard test aircraft. Despite the warnings, no other solution was seen as being viable, so flight testing of the canard proceeded on the Technolog, a two-seat Mirage III that first tested the installation of the J79 engine.

Nose strakes near the tip of the nose were also found (even before the canard solution was reached) to improve high AoA performance but this came at the cost of buffeting at high AoAs, something that would have been unacceptable in air combat. The buffeting was cured on the suggestion of one of the IAI test pilots to add a wing leading edge saw-tooth which helped smooth the local airflow.

These modifications improved the Kfir's performance with the addition of wing area in the form of the canards that shifted the aircraft center of gravity forward, reduced the stability margin enough that the aircraft would be more responsive. The vortices that came off the canard smoothed the airflow over the delta wings which enhanced their lift and performance particularly at high angles of attack. The saw-tooth leading edges also slightly increased wing area and the vortices created by the saw tooth augmented the canard-produced vortices.

The combination of these modifications only added 187 lbs of weight to the new Kfir version designated C2. The side benefit of the structural strengthening of the fuselage for the canards (fuselage Section 10) is that that area was able to also accommodate an additional pair of weapons pylons under the intakes, giving the Kfir a total of five underfuselage pylon stations.

The Kfir C2 entered service with the IDF in 1977. The earlier Kfir C1s only got the nose strakes and a much reduced canard as the structural strengthening and modification to full C2 standards was deemed not worth the effort. Many of those earlier-variant Kfir C1s flew with US Navy and US Marine Corps adversary units in the 1980s as the F-21A Lion.