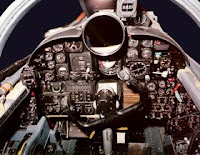 During the design of the first Lockheed U-2 spyplanes, designer Kelly Johnson held fast to his rule "one pound equals one foot of altitude" and if it wasn't completely necessary to the mission, it wasn't going on the aircraft. As a result, many of the navigational aids considered standard on most military aircraft were absent on the U-2. Central to the U-2's navigation equipment was the driftsight- a downward looking periscope that had two selectable magnifications. The circular driftsight dominated the center of the instrument panel on the U-2 until its replacement by GPS and glass displays in the 1990s. The driftsight give the pilot a 360-degree view underneath the aircraft and it was used for navigation in addition to sighting for the cameras.

If the ground wasn't visible due to overcast, dead reckoning was also used since the winds at the altitudes the U-2 operated were usually very light. The aircraft did have a radio compass, the AN/ARN-6, but on deep penetration flights of the Soviet Union, radio stations were far and few between.

A HF antenna system was planned for the U-2, allowing the pilot to tune into HF ground stations and determine his position by triangulation. Though tested successfully, the CIA realized that HF transmissions could betray the aircraft's position and the system, called System II, was dropped from the design.

The solution was to use the driftsight in combination with a specially-made sextant that was aligned with the driftsight's optical path. A mirror could be switched that diverted the view through the optical driftsight to the sextant unit that was mounted just ahead of the cockpit atop the nose. At the 50,000+ feet altitudes the U-2 operated, the sky was black as night even in midday and star fixes could be taken using the sextant coupled to the driftsight. Since the fully suited pilot wouldn't be able to compute the star fixes and positions during the mission, an essential crewmember to each U-2 mission was a flight-rated navigator who planned the star fixes and did all the calculations ahead of each mission. As the calculations were specific for a particular timeframe, it was essential that the U-2 takeoff within a prescribed window of time or the star fixes would have to be recalculated by the navigator.

Email ThisBlogThis!Share to TwitterShare to FacebookShare to Pinterest
Labels: CIA, Lockheed, U-2, USAF