The Flamboyant Markings of VF-51's Phantoms in Vietnam 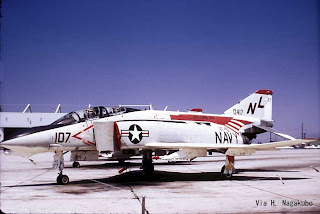 During Operation Linebacker over Vietnam in 1972, the two McDonnell Douglas F-4 Phantom II squadrons aboard the USS Coral Sea, VF-111 "Sundowners" and VF-51 "Screaming Eagles" each had their own obstacles to overcome to become some of the premier Phantom units in Southeast Asia. VF-51, in particular, had a double uphill climb as the squadron had just transitioned from the Vought F-8H Crusader AND their new Phantoms weren't so new- they were old F-4B models that had been rejected by the Marines as unairworthy and had been left in storage at MCAS El Toro in California for years.

Many of the senior cadre of pilots at VF-51 were ex-Crusader jocks who lamented the loss of their 20mm cannon and what they perceived the hassle of having a RIO (radar intercept officer) in the back seat. "I'd rather have 500 lbs of fuel than babysit an NFO (naval flight officer, the category of flight crew that were assigned as Phantom RIOs)." The pilots resented their transition training to the Phantom with VF-121 at NAS Miramar where they had veteran RIO instructors in the back seat. "About as fun as having your mother with you on a date" complained one pilot. VF-51's commander, Tom Tucker, ordered his pilots to "dummy up" and play nice with the RIOs to make the transition as smooth as possible.

Soon the ex-Crusader jocks fell in love with their new mounts. Having more power and a better radar than the Crusader was well-appreciated and a few of the former single-seat pilots also started to like having the extra set of eyeballs afforded by the RIOs. Before long, the pilots started to have preferences for certain RIOs but the RIOs themselves were an independent minded bunch. There's an anecdotal story of one RIO teaching his pilot a lesson on crew coordination when during a training mission the RIO shut down all the key radar and avionic systems and told his pilot "Okay, badass, see how well you can fly and fight now." Since the RIO had the switches for those systems, the pilot was left with little to do but keep from crashing. So an unspoken rule developed at VF-51 that RIOs also had say in which pilots they flew with. Many of the Phantom crews ended up flying with the same pilots and RIOs through much of the Coral Sea's 1972 combat cruise.

Having to get the elderly F-4Bs up and running proved to be VF-51's other difficulty in the run up to the 1972 combat cruise. The latest production model was the F-4J which rectified many of the problems with the F-4B, but as the rapid build-up of forces under President Nixon accelerated, any and all Phantoms that could be spared were snapped up by deploying squadrons. In VF-51's case, that meant a motley assortment of hangar queens from MCAS El Toro that hadn't flown since 1968. VF-51 was given free reign to press into service any maintenance crew from any squadron at NAS Miramar to form "Tiger Teams" that worked day and night to get the F-4Bs ready for combat.

With the pilots transitioned and finally working well with their RIOs and the F-4Bs ready to head to war, the only thing left was the come up with new squadron markings for VF-51's mounts. One of the squadron ensigns was sent to a corrosion control and painting course at NAS North Island and he had figured out which panels were opened up the most during routine combat operations. Squadron markings were devised that avoided these panels so they scheme stayed intact and it was one of the most flamboyant Phantom markings to go to sea- what rival squadrons called the "Supersonic Can Opener" was a bright eagle marking with tail feathers that splayed out on the rear fuselage. Even the main landing gear doors were painted with full color eagle talons.

Some of the Miramar command staff told VF-51 that the only thing their Phantoms were missing now were mudflaps and a raccoon tail attached to an aerial! One of the future MiG-killers of VF-51, CDR Jerry "Devil" Houston, recounted in an interview that while other squadrons were looking at ways to tone down their markings and even conceal their aircraft, for morale they wanted VF-51's markings "to be audacious; we wanted to be a magnet for MiGs...intruders in our airspace didn't have to speculate about who just whipped their ass."

Sister squadron VF-111 on the Coral Sea in response adopted an equally flamboyant sunburst tail marking for their 1972 combat cruise as well.