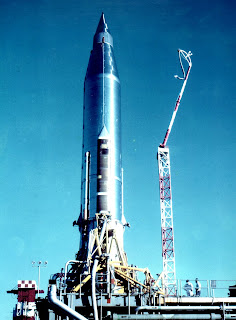 Following the October 1957 launch of Sputnik 1, the US was badly in need of a morale boost in the nascent space race. The Navy's Vanguard rocket program was given the green light to launch in December 1957 and the first stage failed on the launch pad, giving the Soviets a propaganda coup as the launch was publicized in advance. The Army's Jupiter program led by Werner Von Braun had been given the green light after the failure and on 1 February 1958 a modified Jupiter IRBM designated Juno I put the Explorer 1 satellite into orbit.

By the summer of 1958 the Soviet Union had already orbited Sputnik 2 (carrying the dog Laika and the first satellite to weigh over 1,000 lbs) and Sputnik 3, the first satellite to weigh over a ton. It didn't take much to realize that the Soviet Union had already put over 3,000 lbs worth of satellites in orbit using the massive R-7 ICBM and the United States only had less than 70 lbs in orbit, Explorer 1 and the diminutive Vanguard 1 weighing only 3.5 lbs. The head of the Advanced Research Projects Agency (ARPA, which later became DARPA), Roy Johnson, contacted the Air Force about the possibility of orbiting an entire Atlas ICBM which would put four tons into orbit and constitute a huge morale boost for the struggling US space effort.

The concept of putting an entire Atlas missile into orbit was radical- only eight Atlas missiles had been test-flown up to that point and only three were successful. Those early Atlas missiles were the Atlas A variant which had only two engines while the Atlas B had three engines (two of which were dropped as boosters, leaving the center engine to act as the sustainer) and it had just failed on its maiden flight. But Roy Johnson, having seen the Atlas A test data, knew that the performance estimates were conservative and that the Atlas A test flights indicated that the three-engined Atlas B could do it, particularly if all the heavy test and telemetry instrumentation were removed from the missile. But if it could be down, it would but the entire missile and a 300-lb payload into orbit minus the two booster engines. It would be in his words "A master-stroke in the space war" against the Soviets.

ARPA and the USAF agreed on the plan to secretly prepare an Atlas B for launch into orbit. Along the way it was decided that the payload would be a recording and transmitting package that would broadcast a message of peace from President Eisenhower. It would orbit the Earth every 90 minutes at an altitude of 100 miles. The program became Project SCORE (Signal Communication by Orbital Relay Equipment).

Only 88 engineers at Convair and the USAF worked on Project SCORE. Atlas missile 10B was selected for the mission and Rocketdyne, the maker of the Atlas engines, introduced performance enhancements and tweaks to a select group of engines called "Hotrods". Eisenhower, however, was reluctant to lose any more face in the competition with the Soviets particularly in light of the failure on the maiden flight of the Atlas B (designated 3B). The successful test flight of Atlas 4B failed to sway the President but ARPA and the USAF convinced him that the SCORE payload was a crucial test of communications technology and if the missile failed to reach orbit, they could always say that it was a successful ballistic missile test down the Atlantic Missile Range from Cape Canaveral.

Reducing the weight of the Atlas was essential and many systems planned for the Atlas C were incorporated into the 10B vehicle. As it was necessary to allow the various other personnel and contractors to go about their usual work, the 88 individuals (who called themselves the "88 Club") who knew of Project SCORE had to give excuses to non-cleared staff to allow the project to move forward. The head of the project, Col. Asa Gibbs, and his counterparts at Convair kept a notebook of all the excuses they used in an effort to be consistent while guarding the secrecy of the project.

The SCORE package developed by the Army Signal Corps had two tape recorders with one acting as back up as well as the necessary communications equipment to be activated from ground stations. The recording from President Eisenhower arrived at the Cape on the eve of the flight on 18 December 1958 but the SCORE payload was already buttoned up on the Atlas. So the Army had to transmit the message from a trailer hidden in a swamp near the launch pad, but when they did so, part of the President's message got erased. No problem, they could re-upload the recording once the Atlas was in orbit.

The following day on 19 December 1958 the Atlas successfully reached orbit and for many years it was the largest object ever put into orbit with a weight of 8,660 lbs. The command channel to upload the President's message, however, was inadvertently triggered by a radio station in New England that by coincidence happened to be on the same frequency broadcasting a dance band. It took two orbits to get the dance band recording erased and the President's message uploaded. This was President Eisenhower's message:
"This is the President of the United States speaking. Through the marvels of scientific advance, my voice is coming to you from a satellite circling in outer space. My message is a simple one. Through this unique means I will convey to you and to all of mankind America's wish for peace on Earth and goodwill toward men everywhere."

Project SCORE made 34 orbits broadcasting Eisenhower's message repeatedly before the batteries ran out and the Atlas burned up over Africa just over a year later. Even though SCORE was more a propaganda victory for the United States, it was the first demonstration of the potential of space-borne communications relay. While the SCORE payload was active, more than 78 transmissions were made between the satellite and ground stations making it the first communications satellite in the world.

Roy Johnson as the prime mover behind Project SCORE was invited to autograph the side of the Atlas before its launch and after it success, he had commemorative plaques made, one each for the members of the "88 Club" that worked in secrecy in addition to their regular duties to Convair and the USAF.