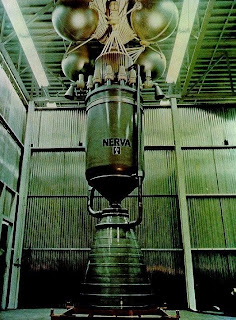 One of the more interesting research programs in the US space effort involved the work on nuclear rockets. Such exotic methods of propulsion are attractive in that a rocket powered by nuclear fission in more efficient than a chemical rocket and generates much more thrust than conventional rockets, making trips to the Moon and the outer planets much shorter than using gravity-assist methods. The first examination of rockets using a nuclear fuel was touched upon by the early pioneers such as Konstantin Tsiokolvsky and Robert Goddard, but the means of containing the explosive power into a controlled release challenged early engineers theorizing on the prospect.

It wasn't until the first controlled fission reaction took place in 1942 at the University of Chicago under the direction of Enrico Fermi that more serious consideration was given to nuclear rocket propulsion. The first serious study of a nuclear rocket took place in 1947 in a classified engineering analysis done by North American Aviation and outlined some of the key technical hurdles. At the same time, United States Atomic Energy Commission (AEC) had done considerable work on the use of nuclear power on aircraft in which air would be superheated by a nuclear reactor and expelled as exhaust in a nuclear jet engine. The work was to have culminated in the Convair X-6, a variant of the B-36 Peacemaker, but the work was eventually canceled. All was not lost as the AEC's effort in designing a nuclear jet engine had direct applications to nuclear rockets which instead of air, used liquid hydrogen would be run past a nuclear reactor and expelled as a high-velocity superheated exhaust.

Robert Bussard, an engineer at the Oak Ridge National Laboratory in Tennessee that had worked on the nuclear jet engine shifted his focus to nuclear rockets and in 1953 published a report examining the feasibility of nuclear rockets. As nuclear reactors became smaller as part of the US Navy's drive for nuclear submarines, a technological threshold was reached in which a small yet powerful reactor for a rocket was possible.

As a result of Bussard's work the US Air Force and the AEC initiated Project Rover to begin work on a nuclear rocket engine in 1955. At the time the USAF was considering either a nuclear rocket or nuclear ramjet for strategic weapons but during this time period advances in solid-fuel rockets displaced nuclear rockets for the ICBM force. A site at the Nevada Test Site called Jackass Flats was established in 1957 to test the designs, the first of which was designated "Kiwi-A" (as the engine wasn't meant to take flight). Several versions of the Kiwi engine were tested at Jackass Flats to test out various systems for not only containing the nuclear reaction but also to control the engine thrust as well as shut down and restart systems.

Since the USAF's original intent in getting involved in nuclear rockets was to have an engine that could lift the heavy nuclear warheads of the time, the technological advances in miniaturization in warhead design as well as progress in solid fuel rockets made nuclear rocket engines unnecessary and in 1960 President Eisenhower transferred the USAF's part of Project Rover to NASA which then set up the AEC-NASA SNPO, Space Nuclear Propulsion Office, where the nuclear rocket engines were considered for the Apollo lunar program and beyond. When President Kennedy laid out his goal of reaching the Moon in his famous speech, he increased funding to the SNPO threefold and the program began work on a more refined engine called NERVA (Nuclear Engine for Rocket Vehicle Applications) in 1961.

Aerojet-General and Westinghouse were awarded contracts in the NERVA program for nuclear engines based on the Kiwi-B design that had been tested at Jackass Flats under Project Rover. With the successful test firing of the NERVA engines, NASA began plans to incorporate the NERVA engine as the third stage of the Saturn V rocket and in 1962 Lockheed was selected to be the prime contractor for the Saturn nuclear third stage which would be designated Saturn-N in which the NERVA-powered third stage would carry the Apollo crew and their spacecraft and lunar module to the Moon.

Within a year, however, NASA decided that the success of the Apollo program depended upon reliability and the Saturn-N third stage was replaced with a conventional liquid-powered rocket engine. The NERVA program was converted to the status of a technology demonstration for possible future uses for manned missions to Mars. Between 1964 and 1969, thirteen different nuclear rocket engines were tested at Jackass Flats, validating the technology. The first Kiwi-A and -B engines used reactors in the 70 Megawatt range which gradually increased in power as testing proceeded.

In 1965 the Kiwi engines were replaced by the more powerful Phoebus engines that were being considered for the manned missions to Mars. The first Phoebus engine test in Nevada ran at just over 1000 MW and by 1968 the last versions of the Phoebus engine were generating over 4000 MW! For comparison, Hoover Dam generates just over 2000 MW of power. The reactor core of the Phoebus engine was ONLY the size of an office desk! But with the success of the Apollo program assured and the costs of the escalating Vietnam War climbing, budget cuts were made and despite the impressive technological success of Project Rover and the NERVA program, work was halted in 1973 under President Nixon.

NASA still has its proponents of nuclear propulsion and in 1989 when President Bush announced a plan for a manned mission to Mars by 2019, the work on NERVA got dusted off only to have its budget slashed again to complete the International Space Station and sustain the Space Shuttle program.

Source: To Reach the High Frontier- A History of US Launch Vehicles, edited by Roger D. Launius and Dennis Jenkins. The University Press of Kentucky, 2002, p60-63.
at 13:20